N/A
Mark the danger zone with a steaming hot baked potato, then stand back as explosive butter rains from the sky!

Butter Barrage is the first ability for Kernel Corn in Plants vs. Zombies: Garden Warfare 2. When used, Kernel Corn will throw a Hot Potato at the ground and then summon a large amount of butter around the potato. Its alternate ability is Bigger Better Butter, but can only be obtained if the player buys the deluxe version. It takes 35 seconds to recharge.

Mark the danger zone with a steaming hot baked potato, then stand back as explosive butter rains from the sky!

Butter Barrage can be very powerful but, because it takes a long time to come in, Zombies may have time to avoid it. Therefore, it is best used at choke points or heavy contrations of Zombies. The most common use for it is to send it into the zombie point in Herbal Assault to try and force the zombies out of it or face heavy damage if they don't. It can also be used in Gardens & Graveyards to stop Zombies from taking a point. It can also be used against Cannon Rodeo or a Big Bolt Blaster if your Shuck Shot isn't ready. Just be sure you don't try to use it indoors, or it will just land on the roof and do nothing.

The butter summoned by the Butter Barrage ability 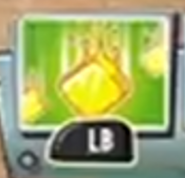 A close up of the Hot Potato

Another close-up of the hot potato