For the Adventure Mode version of this level, see Level 5-5.

Bungee Blitz is a canceled mini-game that is very similar to Level 5-5 of Adventure Mode. It is the only bonus level that is not a mini-game or a puzzle. It can be played using a Cheat Engine and is a conveyor-belt level. It can also be played without hacking in the Quick Play mode of iOS and Android versions of Plants vs. Zombies. 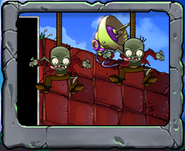 iOS icon
Add a photo to this gallery

Add three addresses and change all the value to 144.

In this level, the only plants which arrive on the conveyor belt are Chompers, Pumpkins, Flower Pots, and Cherry Bombs. Also, rather than coming from the edge of the screen, all zombies are dropped by Bungee Zombies. The Bungee Zombies drop regular Zombies, Conehead Zombies, Buckethead Zombies, and Ladder Zombies. During the waves, Bungee Zombies will drop down and attempt to steal some of the player's plants. It is easier if the player plays Level 5-5 before they play this, as it only has two flags, but when they play it the second time or this, it has three flags.

In general, any strategy that worked for Level 5-5 will also work here.

Only use three Flower Pots, plant Pumpkins in the first column, with Chompers inside (to prevent them from being eaten by zombies). Ladders from Ladder Zombies will allow the rest of the zombies to climb over and allow Chompers behind to devour the zombies. If the Flower Pots start to pile up in the conveyor belt, just plant them somewhere and shovel them.

If a zombie comes right behind another, but the other two Chompers are still eating, replace one with a newer one, but if more than two come, then place a Cherry Bomb instead.

Plant Chompers in the first and the second column in the front line. Even if your front Chompers are still swallowing, the second Chomper can eat the zombies. However, it only lasts for so long. Keep in mind to plant Flower Pots after the first column to buy some time for the Chompers to swallow, you could also use Pumpkin to get extra defense. Never plant too many Chompers on the front line, or else you will vulnerable when the zombies drop behind all of your Chompers. Keep planting Chompers at the back line, so the Chompers can eat the zombies. All of your plants must be protected by Pumpkin.

You can also use the Cherry Bomb, but use it wisely as you do not want to waste Cherry Bombs. One thing that you must know is that you should keep the Roof Cleaner for the Final Wave, as it will be very useful for the ambush zombies. They can also be used to get rid of some ladders on Pumpkins. 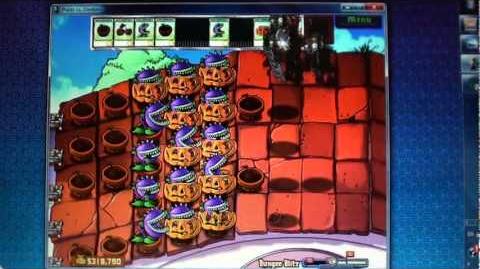 Retrieved from "https://plantsvszombies.fandom.com/wiki/Bungee_Blitz?oldid=2191192"
Community content is available under CC-BY-SA unless otherwise noted.