When played: All Mushrooms get +1

.
You might know him from his wildly popular series of workout videos called "30 Days to a Buff-Shroom Body."
Buff-Shroom is a basic common plant card in Plants vs. Zombies Heroes and a member of the

He does not have any traits, and his ability gives all mushroom plants, including him, +1

He is based on a mushroom, the fleshy, spore-bearing fruiting body of a fungus.

His name is a portmanteau of "buff," referring to his ability and appearance, and "mushroom," the real-life fungus he is based on. His description is a reference to body building.

You might know him from his wildly popular series of workout videos called "30 Days to a Buff-Shroom Body."

This plant can be very devastating for your opponent, since he increases all mushrooms' stats by +1

, including himself. When used in tandem with Shroom for Two, More Spore, and multiple Button Mushrooms, Buff-Shroom can potentially wreak havoc against your opponent. Therefore, you must try your best to swarm the field with mushrooms before you play Buff-Shroom.

Captain Combustible can take advantage of Buff-Shroom's ability by having Potted Powerhouse in his hand. This is especially true if he uses a mushroom deck, where Potted Powerhouse will get a huge stat boost from a single Buff-Shroom should there be many mushrooms on the field.

Nightcap can use this with Smoosh-Shroom and Sportacus to make them even more dangerous, although this makes Sportacus vulnerable to Rocket Science.

Spudow can combine this with Sea-Shroom on the aquatic lane, which can lead him to an easy victory if his opponent doesn't have any Amphibious zombies or any effective way to destroy Sea-Shroom.

However, do not play this plant in Total Eclipse, as that environment's ability will activate before Buff-Shroom can activate his ability, destroying Buff-Shroom and wasting 2 sun.

For an easy reference, here's all Mushroom plants that can be buffed from Buff-Shroom.

You should be aware whenever unusually large numbers of mushrooms are on the field. The Chickening is an efficient counter, since it can wipe out a majority of mushrooms even after they have been boosted by Buff-Shroom once. Weed Spray is also an effective way to quickly clear most mushrooms.

However, zombie heroes who do not have access to any of the two tricks such as Immorticia, Super Brainz, and Brain Freeze should get rid of the mushrooms in another method.

Sneaky heroes can use Fire Rooster or

Strikethrough zombies to clear out many mushrooms at once.

Beastly heroes can do the same with Total Eclipse or

Also, always watch out for Punish-Shrooms, since they can do massive damage to you and your zombies if you destroy the mushrooms. In this case, it is advised to destroy or Bounce them first.

Also, if a mushroom's stats go overboard because it was boosted multiple times, tricks such as Cut Down to Size and Rocket Science can be used. 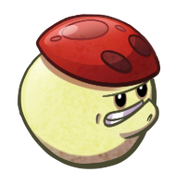 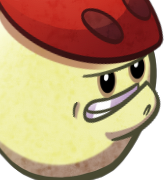 Buff-Shroom tinted gray due to a glitch 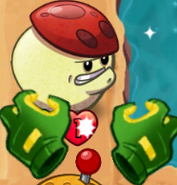 Gardening Gloves being played on Buff-Shroom 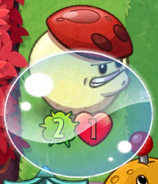 Bubble Up being played on Buff-Shroom 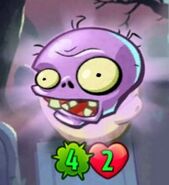 Terrify being played on Buff-Shroom 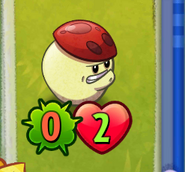