Bud-minton is a national first-class athlete, and in every encounter with a new plant will ask, "Exercise is good for your health, would you like to play me in a game of badminton?"

Bud-minton (杜英投手; pinyin: dùyīng tóushǒu) is a Lobbed-shot plant in the Chinese version of Plants vs. Zombies 2 introduced in the v2.4.83 update. It lobs badminton shuttlecocks at zombies and has a different attack depending on how far away zombies are to it.

Bud-minton is a lobbed shot plant that attacks by serving a badminton shuttlecock then hitting it into a zombie. The shuttlecock will bounce to other zombies in the lane they are in, provided they are within the proximity of the projectile. This makes the plant work in a similar fashion to A.K.E.E. and R.A.D Missiles.

When a zombie is less than three tiles away from it, it will fire a shuttlecock high up in the air, and then spike it down, dealing heavy damage to the targeted zombie with a chance to instantly kill it if at low enough health.

Bud-minton is based on the Elaeocarpus sylvestris, otherwise known as the "Japanese blueberry", but more particularly its flowers, which resemble badminton shuttlecocks.

Its name is a portmanteau of "bud", referencing how it is a flower, and "badminton", the sport whose "ball" Bud-minton's projectile resembles.

When given Plant Food, the plant will unleash a tornado similar to Fanilla that will destroy the first zombie in its path when the Bud-minton next serves. 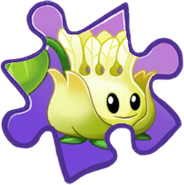 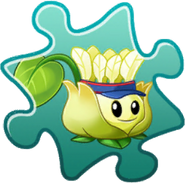 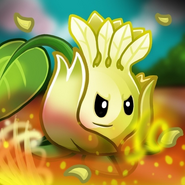 Bud-minton's reveal photo
Add a photo to this gallery

Elaeocarpus (C)
Bud-minton's animations
Add a photo to this gallery

Retrieved from "https://plantsvszombies.fandom.com/wiki/Bud-minton?oldid=2288538"
Community content is available under CC-BY-SA unless otherwise noted.