He's always worn a bucket. First, it was to be unique. Later, he just forgot it was there. 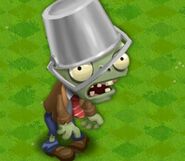 A degraded Buckethead Zombie about to get hit by a Bamboom's projectile
Add a photo to this gallery
Retrieved from "https://plantsvszombies.fandom.com/wiki/Buckethead_Zombie_(PvZA)?oldid=2268829"
Community content is available under CC-BY-SA unless otherwise noted.