Buckethead's bucket is a regulation helmet for Bucketball, the national sport of Bucketonia, the bucket-exporting country that exists only in his one brain cell. Yes, that brain cell is shaped like a bucket. And yes, it's nearly as empty.

Buckethead is a Neighborhood Zombie in Plants vs. Zombies 3.

It is based on the zombie with the same name and appearance of the original game and its sequel. Its in-game name is just "Buckethead" rather than "Buckethead Zombie", this is shared with its appearance in Plants vs. Zombies Heroes.

As with all previous games in the series, Buckethead is an easy zombie to deal with if you have a good setup. However as the game goes on in Devour Tower, it gets stronger.

It can be difficult to deal with at times, But it is recommended to use Bamboo Shoots. There are some strategies with the Buckethead, as almost any plant that does heavy damage in the game can take them out. Just remember to keep taking care of Breakouts and getting seeds to your plants can get stronger so the Buckethead will not get too strong in later Devour Tower levels. 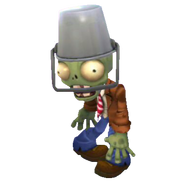