None
Why a bucket? Well, gosh, in this economy, why NOT?
Buckethead is a premium uncommon zombie card in Plants vs. Zombies Heroes and a member of the

Armored 1 trait and does not have any abilities.

He is based on the zombie in Plants vs. Zombies with the same appearance.

Why a bucket? Well, gosh, in this economy, why NOT?

Buckethead is basically a beefed-up version of Conehead. His decent health, along with the

Armored 1 trait, makes him very good against plants that either can't destroy him in one attack or can't survive an attack from him. He can survive powerful tricks like Cherry Bomb and Berry Blast while hitting fairly hard. However, watch out for instant-kill tricks, and especially for

But with Bonus Track Buckethead around, it is better to use him instead if you have it, since he has the Dancing tribe and can also nullify bonus attacks at the exact same cost of 4 brains and the same stats. However, if you are running a professional deck, namely with Zombie Middle Manager and Jurassic Fossilhead, this zombie may prove to be more useful than Bonus Track Buckethead in this situation.

Because Buckethead has the

Armored 1 trait, he is usually hard to defeat with normal means. To easily destroy him, use instant-kill tricks such as Whack-a-Zombie and Squash or boost your plants so they are able to destroy him. Unless his health has been boosted, Hothead and Sizzle will also instantly destroy him. 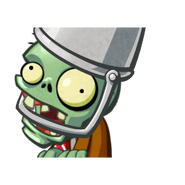 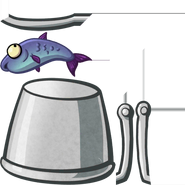 Buckethead attacking from the player's point of view (1)

Buckethead attacking from the player's point of view (2)

Buckethead attacking from the opponent's point of view

Frozen Buckethead with the

Buckethead with a star icon on its health

Lawnmower being played on Buckethead

Buckethead on the advertisement for the Rustbolt Hero Pack

The player receiving Buckethead from a Premium Pack

The player receiving Buckethead from a Premium Pack before update 1.6.27