.
Is there any other kind?
Brute Strength is a super-rare zombie superpower trick card in Plants vs. Zombies Heroes and a member of the

Is there any other kind?

A good use for this trick is to boost zombies that have a good amount of health but lack strength, like Jester, Flag Zombie, or Headstone Carver. Another good way to use it is to play it on zombies with

Strikethrough since they are able to directly attack your opponent. Playing it on Barrel of Deadbeards will put your opponent into a dilemma: if they destroy it, its ability will trigger and make a Captain Deadbeard while doing 1 damage to all other plants and zombies, and if they do not, it will constantly do 3 damage.

But while this superpower can make a zombie hit extremely hard, you still need to keep track of its health as Brute Strength only increases strength. Additionally, it can usually be played just once per game, so pay extra attention and make the most of it.

Since this trick only increases strength but not health of the zombie, you do not have to worry when there is a plant to take care of it, so damaging tricks are a good answer.. Alternatively, you can also Bounce that zombie to completely remove the boost or

Freeze it. If the boosted zombie already has some base strength, it will be vulnerable to Shamrocket/Doom-shroom, and if not, Whack-a-Zombie can easily kill it.

Fortunately, under normal circumstances it can only be used once per game. Still, be on the lookout for the likes of Sugary Treat. 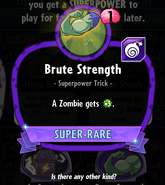 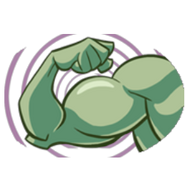 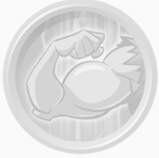 Brute Strength on the So Much Damage! achievement icon (locked) 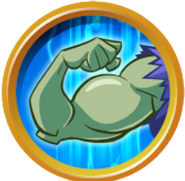 Brute Strength on the So Much Damage! achievement icon (unlocked)

The player receiving Brute Strength after losing a level 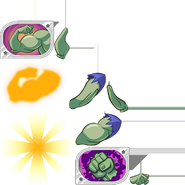