Plants vs. Zombies Wiki
Register
Don't have an account?
Sign In
Advertisement
in: China exclusive, Archived, Plants,
and 8 more
English

Bruce Bamboos hit enemies in a 3x3 radius around themselves.

Bruce Bamboo (竹小龙; pinyin: zhú xiǎolóng) was a plant from Plants vs. Zombies Online. It was obtained through the completion of Qin Shi Huang Mausoleum - Level 2-1. Bruce Bamboos hit an enemy rapidly in a 3x3 radius around themselves, which dealt considerably high damage.

When given Plant Food, it would rapidly hit zombies in front of it and behind it with its nunchaku.

If there was any enemy target in the left and middle column, it attacked these columns. Otherwise, it would not unleash its ability.

Plant may be boosted when planted

With powerful damage, fast attack and recharge like the Bonk Choy and the ability of attacking the adjacent zombies, it can prove to be very useful, especially when planting near pathways in Qin Shi Huang Mausoleum. The Cavalry Zombie can be easily defeated by it, along with Zombie Piggies. Like Bonk Choy, a Wall-nut should be used to protect it. 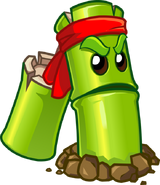 Bruce Bamboo on the map

Attacking in all directions and using Plant Food ability 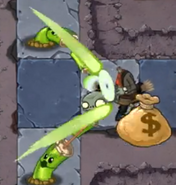 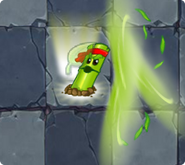 Bruce Bamboo as seen on the old Plants vs. Zombies Online official site 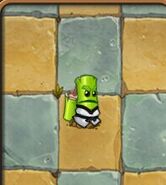 Bruce Bamboo in the trailer

Bruce Bamboo on the Plants vs. Zombies Online website 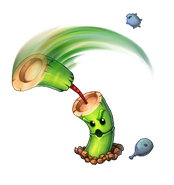 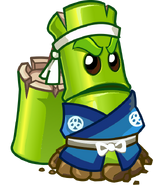 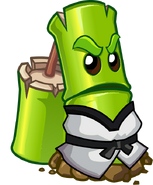 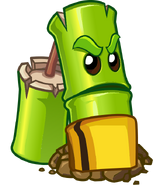