For other uses, see zombies.

Browncoat Zombie is the basic unit of the zombies in Plants vs. Zombies: Garden Warfare, Plants vs. Zombies: Garden Warfare 2, and Plants vs. Zombies: Battle for Neighborville . The plant counterpart of it is the Weed. It can be summoned from glowing dirt piles in Gardens & Graveyards and Taco Bandits. It can be commonly obtained in the Reinforcements Pack in groups of more than one. It is the Basic Zombie from Plants vs. Zombies. The best reason for its abundance (as seen on the picture on the right) is its low damage and very weak toughness. Despite this, they can still buy a few seconds when summoned in mass with Conehead Zombies and Buckethead Zombies. There is a Pirate version which only appears in Garden Ops in Port Scallywag and Sharkbite Shores or when the player destroys a Barrel Pirate's barrel in multiplayer servers. Its attacks are Zombie Hurt and Hard Rock Toss. Each Zombie Hurt attack deals 15 damage while Hard Rock Toss deals 25 damage.

Some festive variants have appeared and distributed in respective holidays, with the same powers and attributes but different appearances and minor health differences.

A Turkey Browncoat has 40 health

A Holiday Browncoat has 50 health

As the only Zombie vegan, the Pumpkin Browncoat refuses to partake in the eating of brains.

Don't ask how a turkey got stuck on his head. He's sensitive and doesn't want to talk about it.

This zombie has a carved pumpkin on his head. Nothing scary about that...

There's a surprise gift under this tree!

A bunny hat doesn't make the browncoats run any faster, but that doesn't stop them from thinking it does.

These zombies are not too strong on their own, and are best used as a distraction so you and your teammates can make progress towards your objective in-game. In Gardens & Graveyards, they can also be used to increase the number of zombies in the garden, so you can have a better chance of capturing it.

Browncoats, as mentioned before, are not very strong on their own. When you encounter one, just use your primary weapon. You could also use your abilities, but it is not really worth it, as it would just be a waste for a zombie that is weak.

To celebrate certain seasons that have occurred during the existence of Plants vs. Zombies: Garden Warfare, special seasonal Browncoat zombies variants were released for a limited time. These are the methods of obtaining them:

Obtained by opening the free Turkey Attack Pack given to all players to commemorate Fall Food Fight. Only ten can be obtained and they can only be obtained from this pack. For some odd reason, they did not return in 2015.

Browncoat Zombie in the winning screen of Taco Bandits 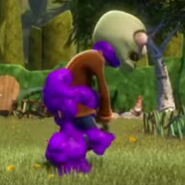 The Turkey Attack Pack, the only way to obtain Turkey Browncoats
Add a photo to this gallery 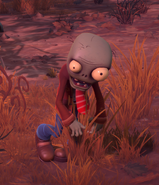 Retrieved from "https://plantsvszombies.fandom.com/wiki/Browncoat_Zombie?oldid=2242155"
Community content is available under CC-BY-SA unless otherwise noted.