The Brothers Gnomus are a group of four Gnome princes who are bosses in the Boss Hunt event in Plants vs. Zombies: Garden Warfare 2 which debuted on November 24th til 27th, 2016, later returning from March 2nd to 5th, 2017, returning again from June 29 - July 2, 2017, returning once again from August 28th to September 5th, 2018, and once again from January 23rd to 28th, 2019. In the event, the zombies must stop the Gnomes from taking over Time Park.

The player joins the game with three other players. The players need to choose the type of bait as known as the Gnomish Contraption, to lure out the Gnomes and edit the difficulty of the level. After the bait has been set up, Gnomes will start to appear. Once the bait is defended, a random Gnomus Brother will appear and the players will have to battle him. Once he spawns, he will turn invulnerable using "Spectrum Attunement" and the players will have to find and shoot a gray box in each area of Time Park (excluding the Seeds of Time area). To be able to damage the brother, all four gray boxes must be changed to the color of the brother (e.g. all boxes need to be blue to damage the blue brother and so on).

The colors shown must match the same as the brothers as followed:

However, once a portion of his health is depleted, he will use "Chromatic Purge" and swap with another brother if not defeated in time, requiring the players to locate the boxes and shoot the shards until they turn the color that the Boss Gnome currently is. This cycle will repeat until the players run out of time or all four Boss Gnomes are vanquished.

When one of the brother is defeated, a colored sphere with a colored shape will appear in the place of the defeated brother. A huge wave of gnome reinforcements will come to the area one a brother has been defeated. A player must interact with this in order to banish the brother back to the Gnomiverse.

Champion Explody Gnomes will appear and if they explode and damage a player, that player will get the Curse of Gnomus, which causes a yellow Gnome head to appear above the player, and slows and stuns them and blocks use of their abilities. This can only be cured by going to the Rome area of the map and interacting with the Gnome Shrine to remove the brand or getting vanquished, but this is not recommended. If a player is still cursed when Chromatic Purge is used, that player will be instantly vanquished. 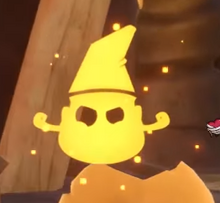 Icon of the Curse of Gnomus