Despite her name, Bride of Frankentuar won't be defined by her humongous hubby. To wit, she scrawled her own definition next to her entry in the Zombiriam-Cobwebster's Dictionary: "Where are napkins, we're out of napkins, no really, where, I need them, where, oh, please and thank you."

Bride of Frankentuar is an Immorticia minion zombie in Plants vs. Zombies 3. She acts like a normal Imp, except her attacks produce chain lightning just like Lightning Reed's.

Bride of Frankentaur is based on the Imp's costume during Lawn of Doom events in Plants vs. Zombies 2.

Her description references that she can be thrown by a similarly-themed Gargantuar during Lawn of Doom events in Plants vs. Zombies 2.

Bride of Frankentuar acts like a normal Imp, but has the ability to shock any plants near one she damages. Stunning plants like Buttercup, Kernel-Pult, and Butternut Squash can prevent her from dealing damage and activating her ability. Slowing effects can keep her away from your plants, but note that Chilling type plants like Snow Pea will deal less damage due to Bride of Frakentuar's Electric type; Caramel Popcorn will work better as a slowing plant against her. Finally, Earthy type plants such as Puff-Shroom and Spikeweed will deal extra damage to her and also take less damage from her attacks. 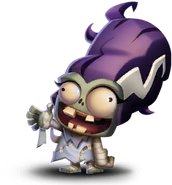