Not to be confused with Brain.
Brian may also refer to Flag Zombie who is revealed to be named Brian.

Becomes invincible until hit with a Soda Trap

Brian is a mission plant boss in Plants vs. Zombies: Battle for Neighborville. He is a Bitter Dill who eats mints regularly. He "thinks he's cool" and is the #1 enemy of Brick Fistmissile. He's the boss of the mission Brinesport: License to Dill, which happens solely because he beat Brick Fistmissile and took off the Detonator for the Stink Bomb.

Brian's name is a pun on the word "brine", water containing a high consideration of salt that is often used for the marination of pickles, as the name "Brian" and "brine" sound alike.

One of Brian's attacks is start spitting a large amount of mints. The best option is to get cover and pay attention to the Garlic Drones, Weeds and Wildflowers that occasionally will appear. When he gets briney (invincible), you'll need to take a mint he'll drop and arm a Soda Trap to get the briney effect off. Keep doing that and he will be defeated. 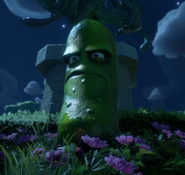