Super Rare
"Breakfast Brainz always starts the day off right, with a hearty meal and plenty of caffeine. He also sports a bacon cape, which is both cool and delicious."
Breakfast Brainz is a Super Rare variant of Super Brainz in Plants vs. Zombies: Garden Warfare 2. The special ability of this variant is that the longer his weapons are used, the faster the fire rate of each weapon becomes. He also gets a temporary speed boost when he vanquishes an enemy. He was added in the Trouble in Zombopolis: Part One DLC.

"Breakfast Brainz always starts the day off right, with a hearty meal and plenty of caffeine. He also sports a bacon cape, which is both cool and delicious."

His rate of fire increases when he continues attacking, but he eventually gets tired and overheats.

Breakfast Brainz should mainly be focused on attacking up-close due to the devastatingly quick punches he can throw. Try to go after Plants that are on their own, or some that have strayed from the group. Challenging a group will be difficult due to the slow starting speed of your punches. His ranged attack is fairly well rounded as well, provided that you have good aim. When you get a temporary speed boost from vanquishing an opponent, use it to get out of there quickly or move on to the next target. A player can nullify the earlier, slow hits by beginning the attack slightly before your punches are in range. By the time you can hit them, the punches will be going fairly quickly, and it will be easier to challenge a group. The main downside is the very long overheat time, however, this can be worked around by using one attack while the other is overheated.

Breakfast Brainz can be very devastating to you if you are attacked up close by him or if you are by yourself in the open. A good tactic is to try to take him out at a distance. If he does attack you up-close, try to get away as quickly as possible before his attacks speed up. If he attacks you at long-range, just keep moving and dodging his slow attacks. Additionally, if the plant that you are using has an ability that slows zombies, such as Potato Mine or EMPeach, it would be wise to use it to temporarily prevent Breakfast Brainz from reaching his target(s). 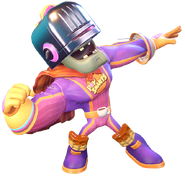 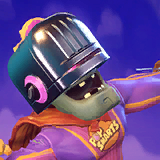 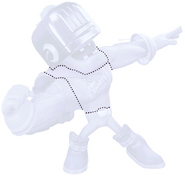 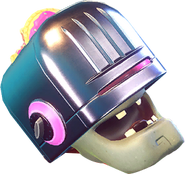