Kicks zombies forward when transported by the power of rap.

Neon Mixtape Tour - Day 17
Delivers only the freshest moves at bargain basement prices.
Breakdancer Zombie is a zombie encountered in Neon Mixtape Tour in Plants vs. Zombies 2. During the rap jam, when any kind of zombies get close to it, it will start to spin, then kicking them forward 1.5 tiles. Zombies that are kicked can be blown away by Blover or Draftodil, if timed properly. It was first revealed in the Neon Mixtape Tour Side B developer diary released on September 15, 2015.

Kicks zombies forward when transported by the power of rap.

Delivers only the freshest moves at bargain basement prices.

Do not be fooled by its health, Breakdancer Zombie teaming with dangerous zombies can cause a lot of trouble to the player's defenses, especially if it teams with Buckethead Zombies, Hair Metal Gargantuars, or Boombox Zombies. He also tends to hide behind crowds of zombies, allowing him to continue assisting zombies. The Breakdancer Zombie could be difficult to take out without plants that can repel zombies such as Primal Peashooter. The worst part is if they team up with MC Zom-Bs as they can both cause a huge disaster, due to the same corresponding jam. Kicking the MCs will allow them to use their ability right away and eliminate plants very quickly. Moreover, Breakdancer Zombie kicking another Breakdancer Zombie is even more dangerous, allowing them to become a relay system of sorts that can bring zombies into your defenses quickly, and if there are enough Breakdancer Zombies on the same row, any zombies can easily get kicked to your lawn mowers or house. It can be very dangerous even if it is near your lawn mowers/house because unlike the Zombie Bull Rider thrown from Zombie Bull, it can have zombies reach your lawn mowers without it have to let the zombies get to the edge of the lawn and walk to them. Using Thyme Warp when this zombie is around and the rap jam is playing is not recommended, as right when the zombies are able to move, Breakdancer Zombie is able to kick all the zombies. If enough Breakdancer Zombies are sent back, they can reach the end of the lawn in quick succession. Coconut Cannons, Citrons, Electric Blueberry, Bonk Choy, Snapdragons, Chompers, and Toadstools are useless as the kicked zombies can reach them fast and quickly overwhelm them. Also, Coconut Cannons, Citrons, and Electric Blueberry may require up to 10 hits to target the Breakdancer Zombie. Tall-nuts do not stop the kicked zombies as they can still bypass it.

In Modern Day, Breakdancer Zombie is an even bigger threat, as they tend to appear early, as well as kicking dangerous zombies such as Octo Zombie. However, unlike Pirate Captain Zombie, Chicken Wrangler Zombie or Weasel Hoarder, Breakdancer Zombies cannot use their abilities off the game's screen, making this zombie easier to deal with. Breakdancer Zombies can also appear from Neon Mixtape Tour portals, along with MC Zom-B. These two can be really dangerous if not dealt, with, as an MC Zom-B can spawn, following by a Breakdancer Zombie who will kick the MC Zom-B deeper into your defenses. Fortunately, he does not appear in Highway to the Danger Room. 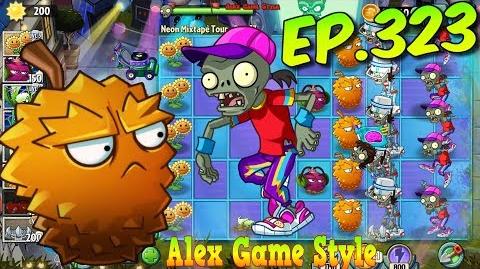