Brainball (originally called Brain Ball) was a competitive mode in Plants vs. Zombies Adventures. In this mode, players hid brains in their town buildings and defended them. They could also attack other players with zombies to get their brains. Players were put in a pool of up to 100 different players that were on around the same levels. (e.g.: some players with The Car Lot may be pooled with ones with The Cafe Lot.) The players with the most brains on the leaderboard (generally the Top 5) won gems split among them, though players higher on the leaderboard got more gems. While it was in testing, this mode introduced new VIPs, the Beetboxer and Acespearagus, along with three new buildings: the Bank, the HOUZ 4 HUMANZ (previously named Skull), and the Lunar Pea Pod (previously named Space Probe). It also was testing unlocking VIPs with gems.

In order to launch attacks on other players, the player had to first train zombies with the Coach Zombie, in a similar way to how they grow plants; although only one wave could have been trained at time. Also, they could only have 10 waves at a time. More zombie waves were unlocked as the town is expanded. There were three waves in each attack, and in each wave the player could have chosen a trained zombie wave to use, and that zombie would then attack along with two other previous zombies. After each wave, a new grave would have appeared at the farthest point the zombies reached, and that was where the zombies would have spawned in that wave. If the player failed to invade the building within three waves, they lost.

During combat, they could collect fog that fell from the sky, and spend it on boosting zombies (2x as fast for 3 seconds) or stunning plants (Pausing for 5 seconds). Each use cost 15 fog, and fog units worth 25 fog fell as often as sun fell. On the first round, the player got 150 fog to start with. If they ended the previous wave with fog remaining, they would have kept that amount, plus 150 more fog at the next wave (Example: Ended with 35 fog, next round you will start with 185). 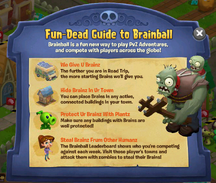 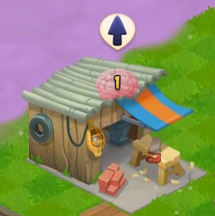 Hidden brain in a workshop

The newest icon for Brain Ball 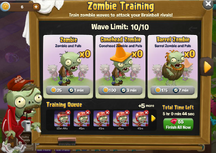 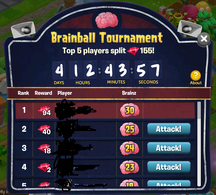 GUI used to find out scores and attack people 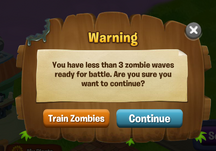 Icon to click to train your zombie waves, it is Coach Zombie's head. 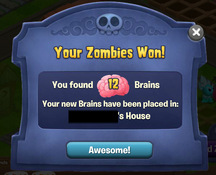 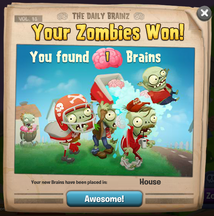 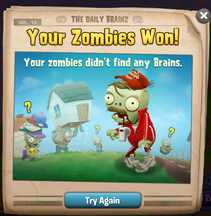 The player didn't find any brains. Note that despite the player got nothing, it still says "Your zombies won!"