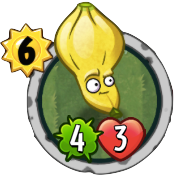 When played: The Zombie Hero loses their Brains.
In this case, "brain drain" is a good thing.

Brainana is a premium legendary plant card in Plants vs. Zombies Heroes and a member of the

. It has the Amphibious trait, and its ability resets the zombie hero's brain counter to zero the turn it is played. Its closest zombie counterpart is Ra Zombie.

It is based on the banana, an edible fruit, botanically a berry, produced by several kinds of large herbaceous, flowering plants in the genus Musa. Its head bears a resemblance to Megamind's, and also some of those in Murderous Maths.

Its name is a portmanteau of "brain," referring to its ability and head, and "banana," the real-life plant it is based on.

Its card description contains the word "brain drain", meaning a situation where there is an emigration of highly trained or qualified people from a particular country, which usually does not mean well for the country of departure. However, the term is taken literally and positively, as it refers to its ability to reduce the zombie hero's brains to 0.

In this case, "brain drain" is a good thing.

Brainana has low stats for a high-cost plant and lacks any type of meaningful synergy, so it's bad for a fighter. This means that this plant is used not because of its stats, but because of its ability. You will only be able to shut down any of your opponent's tricks. (Unless a Kabloom hero has a Seedling that transforms into it, preventing the Zombie hero from playing any cards that costs brains) Therefore, it is better to play it in the late game, as your opponent gets more brains for tricks and environments. However, if you are against an opponent whose strategy involves lowering brain costs, remember that free cards can be played (for example, Rolling Stone when Zombiology teacher is present).

Brainana will ruin strategies with Black-Eyed Pea (Green Shadow only) and Sportacus for a turn, since in most cases, zombie tricks cannot be played and therefore will not trigger their abilities. However, it is very effective against trick-based decks (especially

Brainy heroes like Professor Brainstorm and Immorticia), as you are shutting down the main power source. Brainana also guarantees the safety of your plants leading into the Fight! phase, as your opponent cannot play tricks to destroy them or decrease their stats after they are played with exception of 0-brain cards. It can also be played to simply guard an aquatic lane, as it has the Amphibious trait.

You could also play this when Teleportation Zombie is on the field if your opponent does not play any fighters in the zombies play phase, as playing Brainana will then prevent your opponent from playing both tricks and the zombies that they were planning to play.

If one can ensure its survival, Bouncing it is a viable option, as its ability can be then re-used, which should not be hard in the later turns.

Playing as Green Shadow or Nightcap with cards like Fertilize or Berry Angry gives you the option to boost Brainana to a decently strong fighter, should you be unable to bounce it. If it also happens to be on the aquatic lane, it becomes a tough foe for your opponent if they haven't prepared strong Amphibious zombies or instant-kills.

There are not many ways to counter its ability apart from having Gentleman Zombie on the field, which gives you brains at the start of the Zombie Tricks phase. However, do remember that Brainana only prevents you from playing tricks for the turn it is played, so you can still play your cards normally on the next turn. 0-brain cards can also be played after you lose your brains.

Hearty hero, you can play Ra Zombie to prevent Brainana from being played. However, you can only do so on turns 6 and 7, unless Flag Zombie is on the field to reduce his cost.

If Brainana comes from Seedling, you cannot do anything since you can neither play zombies nor tricks, unless you have other zombies that can lower the cost of cards or give brains such as Gargologist, Gentleman Zombie, Zombology Teacher, and Flag Zombie, or a Swabbie, as he costs 0 brains.

Statwise, Brainana has low stats for its cost, so it is not that threatening, but it can cause you trouble due to its Amphibious trait. The best counters to Brainana itself are Dolphin Rider and Fishy Imp; if you don't have them, then move it out of the water or play a trick to destroy it. But keep in mind that if you decide to play tricks, you won't be able to destroy it on the turn it is played unless you get extra brains via Gentleman Zombie. 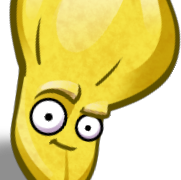 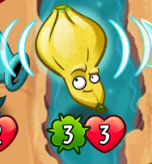 Espresso Fiesta being played on Brainana

A glitch where there is a negative amount of brains, caused by Brainana's ability

Brainana on the advertisement for the Citron Ally Pack

Brainana in Rose's Premium Pack
Add a photo to this gallery

Retrieved from "https://plantsvszombies.fandom.com/wiki/Brainana?oldid=2300641"
Community content is available under CC-BY-SA unless otherwise noted.