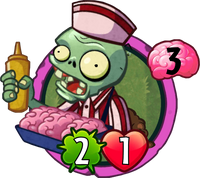 this turn.
Sells only 100% organic brains.
Brain Vendor is a premium uncommon zombie card in Plants vs. Zombies Heroes and a member of the

. He does not have any traits, and his ability gives the zombie hero +3

He is based on a vendor, a supply chain management term describing anyone who provides goods or services to a company or individuals.

Him being a sports zombie may be a reference to stadium vendors selling food during a sports event.

Playing this zombie is basically like playing a zombie for free, provided the player has 3 brains available. This is because he gives back the amount of brains he costs, thus making him free in a sense. Using this early is a good strategy to put some pressure onto the plant hero by filling a lane while allowing you to save your brains for other zombies or tricks. But make sure to play this before the other zombies, as otherwise, you may not have enough brains to play Brain Vendor. Also, remember that quantity is not always better than quality; this zombie has very low stats, and thus, will not do much damage or survive for long.

For hero-specific synergy, Professor Brainstorm can swarm Brain Vendors to boost Unlife of the Party and Valkyrie. Super Brainz and Huge-Gigantacus can combine this with Mixed-Up Gravedigger, hiding all Brain Vendors in gravestones. During the Zombie Tricks phase, they could potentially get up to 12 brains, allowing for extremely powerful combinations of tricks. And finally, Rustbolt can use Brain Vendor in his sports decks. Because this card is essentially free, multiple Brain Vendors can be used to fill a lot of lanes followed by using a Zombie Coach to make it so all of them are shielded, protecting Rustbolt from most forms of damage. You can combine this with Team Mascot to boost his stats as well, but as mentioned before, Brain Vendor is not the best zombie for combat. Rustbolt can also use Flag Zombie to lower Brain Vendor's cost, giving a total profit of 1 brain per Flag Zombie on the field.

Another primary use for Brain Vendor is to give you extra brains so that Zom-Blob can gain even more strength, since it gets +3 strength for each Brain Vendor played. You can also play this in Medulla Nebula to gain 5 extra brains that turn (or 2 more, essentially, since this zombie cost 3 himself). This combo allows you to play powerful cards such as Bad Moon Rising much earlier.

Because of his low stats, this zombie should be very easy to destroy. If playing as a

Kabloom hero, Sour Grapes is a great counter to this zombie as its ability will destroy all Brain Vendors on the field, provided they didn't get a health boost. Playing tricks is not recommended on this zombie unless it affects other zombies too like Scorched Earth, as it is already very easy to dispatch. Only play one if the zombie hero has lots of zombies on the field and a trick is needed to ease off the pressure. Avoid Bouncing this zombie, as he will only support the zombie hero due to his refunding ability.