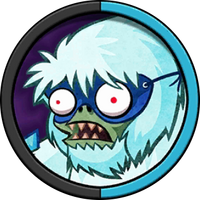 For the achievement in Plants vs. Zombies: Garden Warfare, see Brain Freeze.

Brain Freeze is a zombie hero in Plants vs. Zombies Heroes and the leader of the

Beastly classes. His signature superpower is Frozen Tundra, which gives all plants on all ground lanes the

He is the hero version of Zombie Yeti.

He is based on the zombie in Plants vs. Zombies with a similar appearance.

His name is a pun on "brain freeze," which is what someone gets when they consume something cold too fast, referring to his appetite for ice cream.

Loves ice cream, snowstorms, and brains...not necessarily in that order.

This furry fiend combines the best Zombie Pets in the game. He's got everything from Zombie chickens to walrus riders to robotic sharks! Pet-themed Superpowers like Dolphinado and Frozen Tundra help his deadly zoo finish the job.

Brain Freeze has the most pet zombies of all zombie heroes, so it's a good idea to use his zombies in pet decks. Cat Lady will get strength boosts from playing pet fighters and Zookeeper will help you boost all of the pets' strength up, making them a powerful army. As if that's not enough, Brain Freeze also has a variety of pet tricks, including Locust Swarm and Dolphinado.

He is also the hero who has the second most Imp zombies, with not only the initial Sneaky Imp zombies, but also Loudmouth, Vimpire, and Kangaroo Rider, allowing him to use an Imp deck with great effects. Toxic Waste Imp and Vimpire make a dangerous combo, as

Deadly will destroy any plant Vimpire hurts, and he has the

Frenzy trait, thus allowing him to attack again, provided he is not destroyed in combat, and becoming more powerful. Boosting cards such as Vitamin Z will also make them stronger.

Leading both the Sneaky and Beastly classes, Brain Freeze also has the most Amphibious zombies out of all zombie heroes. His zombies are difficult to hit, and he can also keep aquatic plants in check with ease.

Frozen Tundra can also freeze all the plants on the ground, making most of the zombies on the ground safe in that turn, so zombies can destroy frozen plants easily. Also, it can give Cryo-Yeti +2

for each frozen plant. It will benefit Cat Lady and Zookeeper due to being a pet card.

Brain Freeze's main weakness is that he does not have many tools in order to stop rush decks similar to Super Brainz as he cannot get The Chickening or Weed Spray, so Kabloom heroes can spam weaker plants and win from there. While Fire Rooster, Trapper Zombie , and Sneezing Zombie can help remove them due to their abilities, they cannot stop many higher-health threats at once. Therefore, the closest he can go is to either fight fire with fire, use

Deadly zombies, or remove them one by one with his Beastly instant-kills and stat-degraders, which are very expensive. Fortunately, the Zombot 1000 and Cursed Gargolith combo will take care of rushes once he survives into the late game.

Another weakness Brain Freeze has is that without the help of Imp Commander or Interstellar Bounty Hunter, he cannot draw additional cards. Opponents can drain his cards and win from there if he has neither of these cards, so Imp decks could be a viable option to use with Brain Freeze if you prefer spamming zombies.

Most of the time, Brain Freeze will attempt to use a bunch of pets, like Cat Lady and Zookeeper to boost them all up. Try getting rid of his pets as fast as possible, like Cat Lady. If they already got too strong, then use tricks to raise your plant's attack and health. Pet decks have one slight weakness, which is low health. Knowing this, try to whittle down all the zombies' health. If you are playing as a Kabloom hero, you can combine Sour Grapes with Sergeant Strongberry to potentially take all of his pets out at once. Just attacking Brain Freeze isn't really a good idea, as he will raise all his pet's stats, and then outnumber you with his powerful pets. Be careful when playing as Rose, as her superpower will boost Cat Lady and Zookeeper due to Goat being a pet.