Holds aloft a boom box that tranquilizes all plants with its heartfelt tunes.

Boom box has no effect on ground plants and Phat Beet

(does not react to his music)

(disables boombox and sends zombies back)

Boombox Zombie is a zombie encountered in Neon Mixtape Tour in Plants vs. Zombies 2. Upon reaching the sixth column, he will raise his boombox to play the power ballad jam for a few seconds, immobilizing all plants on the lawn except Phat Beet, underground plants, instant-use plants and Electric Blueberry. This also overrides any other jam currently playing and significantly slows all zombies on the field in Neon Mixtape Tour only. In Modern Day, all zombies retain their speed. Because Boombox Zombie stops any current Jams from playing, he is considered an environment modifier.

Boombox Zombie's jam only lasts for eight seconds, but it can be extended by other Boombox Zombies (as seen on Day 28), as long as they play their jam after the original Boombox Zombie does.

He was first revealed in the Neon Mixtape Tour Side B developer diary, released on September 15, 2015.

He is named after a boombox, a common term for a portable transistorized cassette tape recorder/player and AM/FM radio (and, beginning in the 1980s, a CD player) with an amplifier, two or more loudspeakers and a carrying handle.

He is possibly based on the character Lloyd Dobler from the 1980s movie Say Anything.... His Almanac entry references a line from the film, and he also holds a boombox that plays love songs.

Holds aloft a boom box that tranquilizes all plants with its heartfelt tunes.

Special: Boom box has no effect on ground plants and Phat Beets

Boombox Zombie doesn't want to buy, sell or process anything; he just really wants to consume your brains.

Modern Day: Day 41 and Highway to the Danger Room (portal only)

When you see this zombie, defeat him as soon as possible or he will use his boombox to prevent plants from using their abilities. In Neon Mixtape Tour, he rarely gets far enough into the lawn in order to play his jam, making him not a significant threat. However, if he is left alive for long enough, then he can potentially be very hazardous as plants that are immobilized cannot do anything, leaving other zombies to take down your plants with little to no harm. Also take caution when Breakdancer Zombies or Glitter Zombies are reacting to their jams.

In Highway to the Danger Room, Boombox Zombies are far more dangerous as they can spawn through a portal past the third column to the right, allowing them to utilize their ability at the very instant. However, unlike in Neon Mixtape Tour, Boombox Zombie does not make the zombies slower due to lack of jam speeds in Modern Day.

In lower levels of Highway to the Danger Room, Neon Mixtape Tour portals will generally not spawn enough Boombox Zombies to be too dangerous. The real threat begins in higher levels (Level 30 and above) portals can spawn multiple Boombox Zombies in succession, causing the jam (and stunning effect) to last longer than normal as well as disabling any non-instant plants planted after the first Boombox Zombie plays the jam. If such an event occurs, it is usually better to spend an extra Plant Food per level (if the player does not have Power Lily) in order to prevent stronger zombies such as All-Star Zombie and Robo-Cone Zombie from plowing through the player's defenses while they are stunned. You can also bring Phat Beet, though it may not deal with tougher zombies like Robo-Cone Zombies or Gargantuars.

A safer and economically conservative strategy to use is to feed the Iceberg Lettuce with a Plant Food. However, timing is necessary here because another Boombox Zombie might emerge from the portal or another set of Neon Mixtape Tour portals would appear on the lawn which allows further reinforcements of the same type would extend the jam's duration, allowing Modern Day or other zombies from distant worlds to assimilate and press forward to the player's defenses. A Power Lily is also essential for this technique to give the player a spare Plant Food for last resort option. Assuming that the horde has been frozen by the Iceberg Lettuce, either of the two will happen; 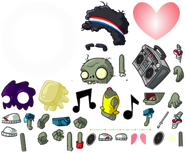 Concept art of Boombox Zombie, along with other Neon Mixtape Tour zombies 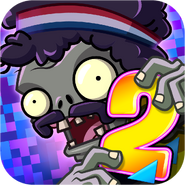 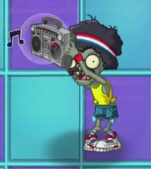 Boombox Zombie in Greatest Hits stunning a lawn of plants 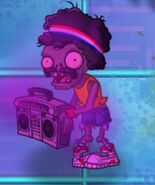 Boombox Zombie being dragged by a Grimrose

Boombox Zombie in a vase

Trapped in an ice block by Ice Bloom 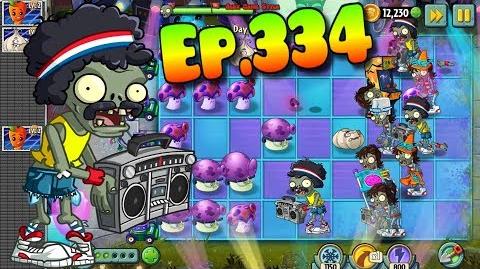