Plants can't do Bonus Attacks.
He put all his favorite songs on that mixtape. If only he could find the right Zombie to give it to.
Bonus Track Buckethead is an event zombie card in Plants vs. Zombies Heroes and a member of the

Armored 1 trait, and his ability prevents all plants on the field from doing bonus attacks. This ability persists until all Bonus Track Bucketheads are removed from the field. His closest plant counterpart is Wing-Nut.

Bonus Track Buckethead was introduced in update 1.12.6, along with Shamrocket, Electric Blueberry, Plucky Clover, Spyris, and Leprechaun Imp. He became craftable as of update 1.14.13.

He is based on Neon Buckethead in Plants vs. Zombies 2.

His description might be a reference to the fact that several Neon Mixtape Tour zombies only activate their ability when a certain jam plays.

He put all his favorite songs on that mixtape. If only he could find the right Zombie to give it to.

While he is better in almost every way compared to Buckethead, Bonus Track Buckethead is still very unreliable and heavily outclassed by many other cards. The first of many problems is that his ability is incredibly niche, so it will not be useful in most matches, especially since it only affects very few cards in one class.

The second issue with him is that he does not really fit any deck or strategy. His stats are quite poor for tempo decks, he does not have enough strength for aggro (Nor is Hearty an aggressive class), and his ability is one of the worst control ideas in the game. With all this taken into account, he will have many problems to fit any of your decks, when cards like Zombie Coach, Jurassic Fossilhead, and Going Viral are way more useful for the same crafting price, or cheaper in Zombie Coach's case.

The only case scenario in which he can be good is in Zombie Missions, where you can see what Hero you will fight, so if you are going against a

Mega-Grow Hero, it might be a good idea to run a couple copies of it in your deck, as they tend to have bonus attack cards in their decks.

Bonus Track Buckethead should not be much of a threat, as he only affects a very small amount of cards. To remove him you can use nearly any 4-Cost Plant, since he has low stats, he will not trade very well. You could also reduce his strength to make him a lane clog, as he will have low strength and not a good ability to support the Zombie Hero.

In the rare case you are running a bonus attack deck, then try and use heavy hitters to dispose him as quickly as you can, removal cards are ideal for these cases, especially Whack-a-Zombie, as it can destroy him for less than what he costs. Other options include moving him to lanes with Plants using Sweet Potato, or Banana Peel, damaging with Berry Blast or Sizzle, or using Shamrocket if his strength is too high.

Either way, he is not much of a threat, so it should not be very hard to get rid of him. 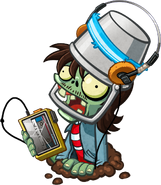 HD Bonus Track Buckethead from the Plants vs. Zombies Twitter 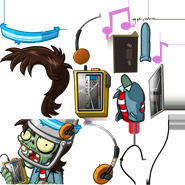 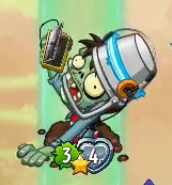 Bonus Track Buckethead on an advertisement for the Event Rewind Bundle

Bonus Track Buckethead with the

Bullseye trait due to Disco-Naut's ability

Bonus Track Buckethead with a star icon on his strength

Bonus Track Buckethead being the featured card in the menu for the 16th February, 2019 Daily Challenge