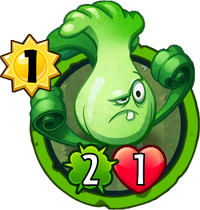 this turn.
Little known fact: He used to have two teeth.
Bonk Choy is a premium uncommon plant card in Plants vs. Zombies Heroes and a member of the

, but only for the turn he is played. His closest zombie counterpart is Tennis Champ.

He is based on the plant in Plants vs. Zombies 2 with the same name.

Little known fact: He used to have two teeth.

Bonk Choy can be considered as the plant equivalent of Tennis Champ. However, Bonk Choy has higher base strength than Tennis Champ, while his extra strength boost is significantly lower than his zombie counterpart. The strategy for Tennis Champ mostly works the same for Bonk Choy; only use him in the early rounds where weaker zombies are present, as he will be near useless in later rounds.

Bonk Choy is an excellent counter against zombies that cost 1 brain and have 3 health, such as Quickdraw Con Man, Headstone Carver, and Arm Wrestler (due to it getting boosted when Bonk Choy is played there). The only possible 1 brain zombies that can survive Bonk Choy's attack are Cat Lady and Planetary Gladiator, but only if they are unharmed.

You can also use him for Savage Spinach's Evolution due to him being in the leafy tribe. While Umbrella Leaf, Shellery, and Lily Pad are better choices due to their traits, the latter two are only possible as Green Shadow, while Umbrella Leaf can be better off preserved due to her useful ability. Bonk Choy can also be used to easily boost Potted Powerhouse as his ability guarantees a strength boost, and due to his cheap price, he is easier to spam.

This plant's high strength and low health means that he is a glass cannon, which means that while he hits very hard, he is easy to destroy. Because of this, expect your opponent to use this as a cheap way to destroy an important zombie with 3 health or less. Damaging cards such as Conga Zombie, Fireworks Zombie, and Bungee Plumber, and stat-reducing cards like Nibble, Pied Piper, and Acid Rain are all excellent options to use against Bonk Choy. Total Eclipse can also be used to take Bonk Choy out, provided his health isn't boosted.

Retrieved from "https://plantsvszombies.fandom.com/wiki/Bonk_Choy_(PvZH)?oldid=2282862"
Community content is available under CC-BY-SA unless otherwise noted.