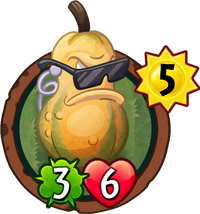 When played: Fill your Super-Block Meter to full.
He moonlights as a decorative center piece during the fall.

Body-Gourd is a galactic legendary plant card in Plants vs. Zombies Heroes and a member of the

He is based on a gourd, likely the butternut squash (a variety of the species Cucurbita moschata), a large fruit with hard skin, and a bodyguard, a security guard/government law enforcement officer/soldier who protects people from danger.

His name is a portmanteau of "bodyguard," referring to his ability and appearance, and "gourd," the plant he is based on.

His earpiece and sunglasses allude to the stereotypical outfit of bodyguards.

He moonlights as a decorative center piece during the fall.

plant along with the Amphibious and Team-Up traits can help you protect a fragile plant behind or block a dangerous threat in one lane. However, the main benefit of this plant is his ability, as it allows you to instantly block the next attack. This ability can be used to survive a single dangerous hit from a strong zombie and get a superpower to turn the tides of the game, unless said zombie has the

However, the downside is that this plant can deplete the Super-Block Meter easily. Combined with that each hero can only block 3 times during a single match, they mean that you cannot block any more and gain any free-to-play-immediately superpowers once you have blocked 3 times. Therefore, unless the intention is for higher draw chance or just its raw stats, having three or more in the deck may not be consistently valuable, as the latter Body-Gourds might only serve as Team-Up support and nothing else unless your opponent manages to remove some sections from the Super-Block Meter either with Monkey Smuggler or Shieldcrusher Viking.

Additionally, although the full meter is highly defensive, keep in mind that it does not protect against

Bullseye attacks, nullifying his ability. Alternatively, they can still reduce your charge with Monkey Smuggler or Shieldcrusher Viking; the latter the greatest counter of it as its

Bullseye trait guarantees him with resetting the block meter regardless should he hit, therefore wasting Body-Gourd's ability.

While this plant is essentially an Amphibious Wall-Nut with 3

, its unique ability allows the opponent to guarantee a block from the next zombie that hits them, so don't rely on just one leftmost zombie’s strength if playing against any Guardian hero. The full Super-Block Meter can be counted in any similar strategy when playing around a meter that is naturally almost-charged from zombie hits. The best way to counter this ability is by hitting your opponent with Shieldcrusher Viking, who grarantees with his

Bullseye trait that he will drain your opponent's Super-Block Meter regardless of Body-Gourd’s effort. Other

Bullseye zombies can also be substituted as they bypass the Super-Block Meter and attack your opponent freely, but keep in mind that they are generally less potent than Shieldcrusher Viking in any other situation. Alternatively, one can counter activate the Super-Block with a cheap (and generally weak) zombie or trick (such as Bungee Plumber) rather than a strong attack as your opponent might have expected, depleting the Super-Block on something pointless rather so the stronger one(s) can land hits with low risks. Beware, however, that this will give your opponent their superpower earlier, which will need to be countered separately. 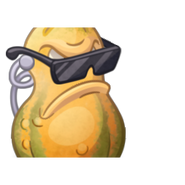 Captain Combustible's block meter full due to Body-Gourd's ability; note that Body-Gourd does not belong in the Kabloom or Mega-Grow class

Extinction Event being played on Body-Gourd

Peel Shield being played on Body-Gourd

Body Gourd's textures prior to update 1.2.11
Add a photo to this gallery

Retrieved from "https://plantsvszombies.fandom.com/wiki/Body-Gourd?oldid=2285981"
Community content is available under CC-BY-SA unless otherwise noted.