Bobsled Bonanza is a mini-game which can be unlocked after beating Adventure Mode in Plants vs. Zombies, Plants vs. Zombies: Journey to the West, and Plants vs. Zombies: Great Wall Edition. Bobsled Bonanza is a Pool level, which starts with four permanently placed ice trails on four ground lanes (up to the fourth column), and almost all of the zombies that appear throughout the level are Zombie Bobsled Teams and Zombonis. If the player melts the preplaced ice, they will face several Zombonis before any Zombie Bobsled Teams. 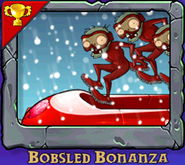 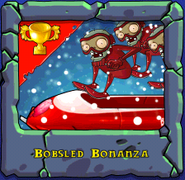 A Zombie Yeti in Bobsled Bonanza

Another Zombie Yeti in Bobsled Bonanza

On iPod Touch and iPhone versions, you can play this before you get Lily Pad.

A strategy using only Spikeweeds, Spikerocks, and Tangle Kelps to kill zombies by Hoanganhminh (modded)

A lot of Bobsled Team Zombies

Repeater, Spikeweed and a lot of instant-kills strategy by MyNameIsMyName

When all the ice is melted, only regular Zombies will appear.
Add a photo to this gallery 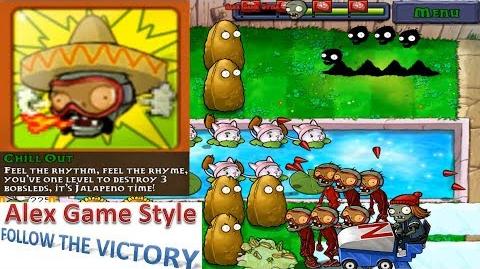 Retrieved from "https://plantsvszombies.fandom.com/wiki/Bobsled_Bonanza?oldid=2263933"
Community content is available under CC-BY-SA unless otherwise noted.