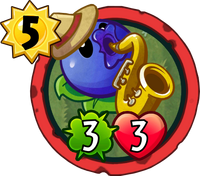 When played: Do 2 Damage.
Loves to make Zombies sing the blues.
Bluesberry is a premium uncommon plant card in Plants vs. Zombies Heroes and a member of the

. It does not have any traits, and its ability does 2 damage to a selected zombie or the zombie hero when it is played. Its closest zombie counterparts are Conga Zombie and Foot Soldier Zombie.

It is based on a blueberry, a perennial flowering plant with indigo-colored berries; and a blues musician. It also resembles one of the blueberries on the scrapped blueberry plant in the original Plants vs. Zombies and Plants vs. Zombies: All Stars.

Its name is a portmanteau of "blues," a genre of music and one of the music forms of jazz, referring to its saxophone, and "blueberry," the real-life plant it is based on.

Bluesberry does not have very good stats for a plant that costs 5 sun (although they do make it immune to most instant-kills, so all it has to worry about is the occasional Knockout). However, its ability to do 2 damage to a selected target, while low, may be useful, as it can weaken or destroy a zombie or possibly finish off your opponent. Essentially, Bluesberry is a bundle containing a Banana Bomb and a 3

Due to it being a berry, it can synergize nicely with Sergeant Strongberry, High-Voltage Currant, and Strawberrian to put some extra damage and even take down its target. But on the other hand, it is also susceptible to Squirrel Herder (should it pose a threat to your opponent).

Unfortunately, Bluesberry has a few drawbacks. Not only is it expensive with low stats and an underwhelming ability, it has too many viable rivals that excel in either stats or ability. If direct damage is what you want, Banana Bomb, Berry Blast, and Shelf Mushroom are cheaper and more cost-effective options. If you look for cost-efficiency in terms of stats, Fireweed, Invasive Species, Strawberrian, as well as plants in other classes like Savage Spinach and Leaf Blower, are better options. The only advantage Bluesberry has is that it has a bit of both, and even then, it can only serve well as a backup fighter with a niche ability and never as your main offense or defense.

Bluesberry's stats are pretty low, so you should have something to destroy it easily on the fifth turn. Do beware of its ability, however, as it can snipe an important zombie to destroy it or put it in destroying range. The best counters to its ability would be health-boosting cards like Camel Crossing and Possessed, and forms of protection like the

If Bluesberry poses a threat to you and must be destroyed immediately, the easiest solution would be playing Knockout or Squirrel Herder. If you don't have either, play Locust Swarm or weaken it with a damaging trick/ability.