Zombie Evolution: Bounce a plant.
Much more successful than his cousin, the Inhalegun Imp.
Blowgun Imp is a colossal rare zombie card in Plants vs. Zombies Heroes and a member of the

His name is a combination of "blowgun," the weapon he is holding, and "Imp," the type of zombie he is.

The leaves and flower on his head are a form of camouflage, a tactic commonly used by many organisms to conceal themselves.

Deadly trait may be a reference to how some cultures dip the tip of darts in arrow poisons.

Much more successful than his cousin, the Inhalegun Imp.

Alone, this is a powerful card, having both

Strikethrough. You can use this to bust through a line of tough plants easily. His Evolution ability is no slouch either, turning him into a Pogo Bouncer with slightly better stats and two dangerous traits. However, do not activate his ability if Jelly Bean is on the field, unless you are about to Bounce Jelly Bean itself.

Because of his Imp tribe, you can use this with Imp Commander to draw extra cards. Since he is also in the dancing tribe, you can use him with Flamenco Zombie, Aerobics Instructor, and Headhunter, but this can be only normally done as Impfinity.

Playing him in Laser Base Alpha is a waste of space, as he already has the traits the environment gives. Toxic Waste Imp's ability will be useless as well since Blowgun Imp already has

This card has low stats, so something simple like Berry Blast or Whack-a-Zombie can take him out. The real danger lies in his traits, which make him nigh impossible to stall with plants. Try to dispose of him quickly, or he will wreak havoc on your defenses. Fortunately, he is quite expensive, so your opponent probably won't have much to back him up. 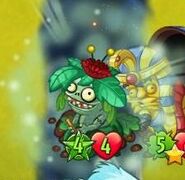 Evolved Blowgun Imp on the field 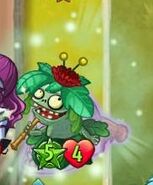 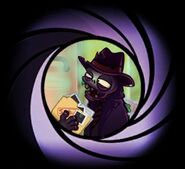 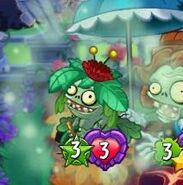 Evolved Blowgun Imp with the

Untrickable trait
Add a photo to this gallery

Blowgun Imp on the field

Blowgun Imp destroyed
Add a photo to this gallery

Retrieved from "https://plantsvszombies.fandom.com/wiki/Blowgun_Imp?oldid=2159992"
Community content is available under CC-BY-SA unless otherwise noted.