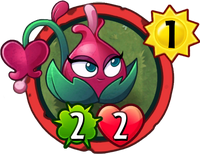 For the version in Plants vs. Zombies 2, see Blooming Heart.

When this does damage, it gets +1

.
Sometimes we hurt the ones we love. Blooming Heart knows this all too well.
Blooming Heart is an event plant card in Plants vs. Zombies Heroes and a member of the

every time she does damage. Her closest zombie counterpart is Zombot Drone Engineer.

Her ability is based on her counterpart's ability in Plants vs. Zombies 2.

Her description is a reference to her Almanac entry in Plants vs. Zombies 2.

Sometimes we hurt the ones we love. Blooming Heart knows this all too well.

Blooming Heart is a very cheap plant to easily gain strength with. You can play this card early to start dealing damage to the zombie hero while she gains strength. Putting her along with other plants can stress the zombie hero into blocking her while other plants attack them.

The only downside to this plant is that she has low health, which means Blooming Heart can be destroyed easily. In that case, try to play Team-Up plants to protect her, or if you are playing as Captain Combustible or Spudow, try to boost her stats to make her unstoppable. Nightcap can

Freeze or Bounce zombies in her way to prevent them from destroying Blooming Heart. Another problem is if you play Blooming Heart in the late game, her ability can be hard to activate for a short time. So as to say, she is best played in the early or mid-game, unless you use boosting tricks.

Since she falls under the flower tribe, Blooming Heart also benefits from the ability of Power Flower and Briar Rose. However, only Solar Flare can do this normally. Plus, while the chances are slim, you can Conjure this from Cosmic Flower, giving it Strikethrough--not only a heavy-hitter to the face all the time, but also, this can upgrade its strength 2 times in one attack if there is a zombie in its lane.

As Spudow, avoid playing Pecanolith while this is on the field, as it will keep her stats to 2/2.

Her ability to gain strength every time she does damage can make her troublesome early-game, but she can be destroyed very easily with tricks like Bungee Plumber, Rolling Stone, or Weed Spray upon being played. You should start putting focus on destroying her if she manages to start gaining strength. Certain cards that can destroy a boosted Blooming Heart are instant-kill cards such as Rocket Science or Locust Swarm.

You could also try to put a zombie with 2

or more to destroy her, but be careful. Because she is in the Kabloom class, the plant hero may use damaging tricks like Berry Blast to destroy that zombie, so aim to use tricks that damage or destroy plants, or play Gravestone zombies or hide that zombie in a gravestone with In-Crypted, Mixed-Up Gravedigger or Cursed Gargolith to avoid taking huge damage and have a chance to destroy her (though Spudow can use Grave Buster to destroy gravestones, so be careful when against him). As a last resort, you can Bounce this plant to completely reset her strength.

Retrieved from "https://plantsvszombies.fandom.com/wiki/Blooming_Heart_(PvZH)?oldid=2333964"
Community content is available under CC-BY-SA unless otherwise noted.