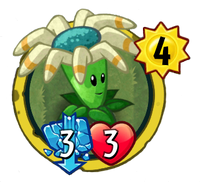 For other uses, see Bloomerang (disambiguation).

None
"Magnets? Gravity? Crikey, I don't have a clue why they come back."
Bloomerang is a premium uncommon plant card in Plants vs. Zombies Heroes and a member of the

Strikethrough trait and do not have any abilities.

In their description, Bloomerang speaks a language using stereotypical Australian terms, such as "Crikey," referring to the fact that boomerangs were invented in Australia. It is also a reference to boomerangs and their ability to return to the thrower once thrown.

Strikethrough trait references their ability to attack multiple zombies at once in Plants vs. Zombies 2.

"Magnets? Gravity? Crikey, I don't have a clue why they come back."

Bloomerang is a solid and reliable plant with good stats. Even if they are not boosted, they can survive a hit unlike Fume-Shroom (although you shouldn't expect them to survive for long), and they have the

Strikethrough trait as well, allowing them to hit both the zombie and your opponent. Since they are a flower plant, they can also be used in a flower deck with Power Flower and Briar Rose. The only problem about Bloomerang is their cost, since 4 sun is a bit pricey. But since you can make lots of sun early on, it is only a minor problem. Chompzilla and Solar Flare can focus on merely buffing it (as long as it isn't in the danger of getting hit by Rocket Science) or protecting it for a longer period of time, but it's generally better not to focus so much on it, as it doesn't have any abilities other than being a Strikethrough Flower.

Bloomerang should be easy to destroy at the fourth turn as their stats aren't that much of a problem, but with

Strikethrough, they will easily chip away at your health anyway. While you can just play some zombies to destroy them, you can also play tricks like Knockout and Electrobolt to destroy them the turn they are played. 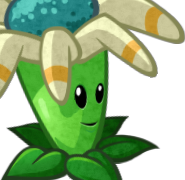 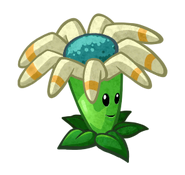 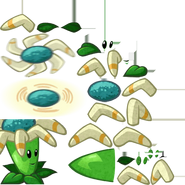 Bloomerang tinted gray due to a glitch

Gigantic Bloomerang due to a glitch 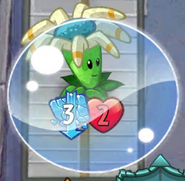 Bubble Up being played on Bloomerang 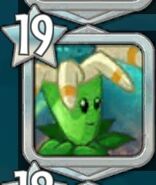 Bloomerang as the profile picture for a Rank 19 player 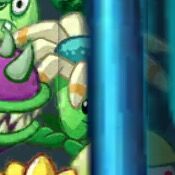 Bloomerang on the background of the Multiplayer menu 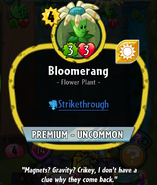 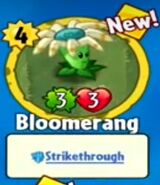 The player receiving Bloomerang from a Premium Pack before update 1.2.11
Community content is available under CC-BY-SA unless otherwise noted.
Advertisement