Not to be confused with Ice Block Zombie, a zombie from Plants vs. Zombies Adventures.

The ice block on his head provides amazing protection from damage.

Frostbite Caves - Day 8
One day, a Cave Zombie fell head-first into a glacial stream. It had been a bad day already, so he lay there in the frigid water for a long time contemplating the insignificance of his life. When he finally stood up, he discovered that his head was encased in ice. At last, his life had meaning! He was unique! He was Blockhead Zombie! At least, that's his story and he's sticking to it.
Blockhead Zombie is the eighth zombie encountered in Frostbite Caves in Plants vs. Zombies 2. Like Knight Zombie, Jurassic Fossilhead, and Brickhead Zombie variants, he does not have a special ability. Instead, his only purpose is to absorb a large amount of damage from plants and protect zombies behind him. Despite having headwear made of ice, he does not have any weakness to fire-based projectiles, such as flaming peppers, fire peas, and plasma peas. In fact, the Hot Potato cannot be used as well to defrost the headwear.

As with any other Frostbite Caves zombies, the Blockhead Zombie is completely resistant to Iceberg Lettuce and Cold Snapdragon's ability to freeze zombies.

The Blockhead Zombie has a rugged, protective ice block on his head that covers most of his face. His attire and facial hair are the same as a standard Cave Zombie's.

The ice block on his head provides amazing protection from damage.

One day, a Cave Zombie fell head-first into a glacial stream. It had been a bad day already, so he lay there in the frigid water for a long time contemplating the insignificance of his life. When he finally stood up, he discovered that his head was encased in ice. At last, his life had meaning! He was unique! He was Blockhead Zombie! At least, that's his story and he's sticking to it.

Although Blockhead Zombie has moderate speed, his ice block absorbs a lot of damage, which means this zombie is very strong. Like his counterpart, Knight Zombie, he can be a big problem if you are unprepared. If you see him in the seed selection screen, use a Potato Mine, Toadstool, Chili Bean, Squash, or Chomper to kill him instantly, because Blockhead Zombies are harder to destroy than Buckethead Zombies. If combined with Hunter Zombies and Dodo Rider Zombies, they can be very threatening. Avoid using Magnet-shrooms, as unlike Knight Zombie's helm, the ice block is not magnetic, thus wasting 100 sun and a seed slot in the process. If the premium seed slot expansion is purchased, this will aid the player greatly. It can allow another high-damage plant, such as Cherry Bomb, Jalapeno, or Squash, to be used. Also, be sure to stock up on plenty of coins by the Endless Zones or the levels you previously played in order to use Power Ups to kill this zombie in a final attempt to defend your house.

Using Sun Bean on this zombie is a very good idea. It is best to use Plant Food on the Sun Bean to kill him instantly because you could get a lot of sun from this zombie and ice blocks give more sun than buckets when they are destroyed.

Among all the plants released in Frostbite Caves, Chard Guard is the most effective against this zombie, as it can hurl him and other zombies back, buying your defenses time. If you want to use Chard Guard against him, it is recommended to have high damage plants behind the Chard Guard, to deal damage while Chard Guard flings back Blockhead Zombie. Pepper-pult can also be used against this zombie, but the peppers will not deal more damage, even though they are on fire and the Blockhead Zombie's protection is made of ice. Because of this and Pepper-pult's low rate of fire, it is best to either use another plant alongside it or have more Pepper-pults, as a couple will not be enough. Since he eats plants normally, it's possible for a player to use Chili Bean as well, not to mention it can freeze the zombies behind him. On levels with zombies frozen in Ice Blocks, a Hypno-Shroom against him can effectively eliminate both him and the frozen zombies in the lane, buying you time to accumulate sun. Grimrose and Shadow-Shroom, as well as Goo Peashooter all ignore his ice block and easily kills him. Do note that when they come in hordes, this can be a problem. A plant food on a Hypno-Shroom can take out a whole lane of them if properly assisted. 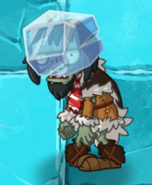 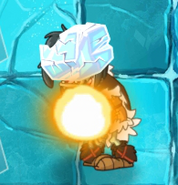 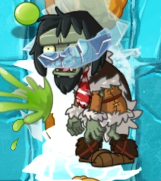 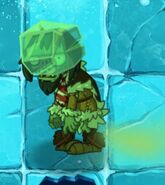 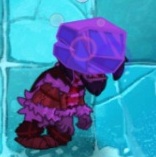 Blockhead Zombie in a vase 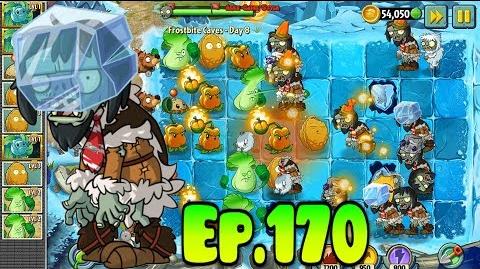 Specific to the Chinese Version (China only)