For the version in Plants vs. Zombies 3, see Blockbuster.

Plant Evolution: Destroy all Gravestones here and next door.
They call it a graveyard. She calls it a buffet.
Blockbuster is a colossal rare plant card in Plants vs. Zombies Heroes and a member of the

Bullseye trait, and her Plant Evolution ability instantly destroys all zombies on the lane she is on and the lanes adjacent to it that are in gravestones.

She is based on a Grave Buster with more vines and a primal yellow striped pattern, and on top of a destroyed gravestone.

Her ability is a pun on "blockbuster," an informal term used to describe a high-budget production aimed at mass markets, with associated merchandising, on which the financial fortunes of a film studio or a distributor depended, as Blockbuster's ability literally busts (destroys) blocks (gravestones).

They call it a graveyard. She calls it a buffet.

Blockbuster doesn't have good stats, only being average only via the help of Starch-Lord. However, Blockbuster's main use is to destroy gravestones. While Grave Buster is cheaper, Blockbuster can destroy up to 3 at once. It is also a fighter, so it is possible to reuse her via Bouncing cards (mainly as Citron or Beta-Carrotina since they are the only heroes with access to such cards); activating her ability won't be difficult either, since the Evolution ability can be used on any plant.

It is best to play this card on another plant when there are a lot of gravestones to get rid of multiple zombies. This is an especially good idea if a Mixed-Up Gravedigger was played beforehand, as there is a three-in-five chance at most that you will take down Mixed-Up Gravedigger before it can even attack. Due to her ability, she will also leave multiple open lanes unless the zombie hero somehow plays zombies (like Beam me Up) in the tricks phase.

Since her ability is the only viable aspect about her, it is always best to play this on another plant. Using swarmable plants like Puff-Shroom or tough plants like Wall-Nut makes it easier for her to Evolve.

Citron and Beta-Carrotina can take this one step further by using Spyris to see what zombies are in what gravestones to know when Evolving Blockbuster can be most devastating for their opponent.

There's not much you can do about her ability when it has activated. It is best to try to be careful about playing gravestones if facing a Guardian hero on turn 4. Try to play them on lanes in which Blockbuster can't get rid of both, like the one on the heights and the one closer to the aquatic lane, if possible. You will also want to be careful when playing Mixed-Up Gravedigger or Cursed Gargolith as they can be destroyed easily by Blockbuster. If you have to play Mixed-Up Gravedigger, try to play all your zombies as far away from one another to minimize the loss of your gravestones.

The best counter for Blockbuster is to not have any, or at least not rely on Gravestone zombies, good examples of decks being many Imp or dancing decks. If you don't have gravestones to play, then her Evolution ability will be completely useless. That way, she will just be a basic 3

Bullseye, which should be fairly easy to deal with in the mid to late game. However, be warned if your health is low, as you will not be able to block this. If this ever becomes a problem, Zombot's Wrath or a zombie with 3

can take it out easily. If it is boosted, an instant-kill trick like Rocket Science is your best bet. 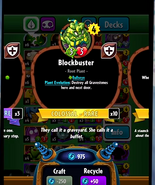 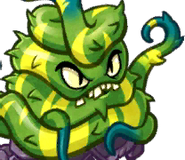 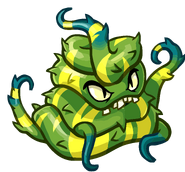