For a similar looking zombie in the online version of Plants vs. Zombies, see Giga-Football Zombie.

Unlike the All-Star, the Blitzer does not wield any weapon. He often keeps a sizable distance from the player until he attacks. His main attack is using Sprint Tackle, an All-Star ability. However, he can use Sprint Tackle infinite times and knock players away, which makes it hard to face multiple Blitzers. He also can use Zombie Hurt and Hard Rock Toss on the player, attacks that most forms of Browncoats also use. He has the same health as the All-Star, but requires more ranged firepower to be taken out.

He is based on Giga-Football Zombie from Plants vs. Zombies but with some major differences like the 2 big horns on his helmet and his shoelaces.

He has his own special wave called Tackle Dummies. A bunch of them will appear in a Super Gargantuar Wave, and the All-Star wave in Power of the Flag game in Backyard Battleground. He also appears in reinforced hordes.

If you see a Blitzer facing towards you, you had better escape fast, as each tackle deals 35 damage to you, has a 5 second cooldown, and propels you into the air unrooting you. As mentioned earlier, his tackle does not have the cooldown of a playable All-Star, so it is possible to get shoved into a corner and killed by one or two Blitzers. As Peashooter, you can use Hyper or Super Pea Jump to escape him. As a Chomper, use Burrow or Sprint Burrow to escape. Additionally, you can chomp him, but beware that you need to be fast, as he can still tackle you out of the Burrowing mode. As a Cactus, you can place Tallnut Battlements to block him. It is also good to use the Garlic Drone from a safe distance from this zombie. 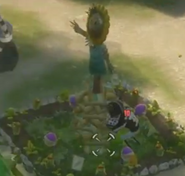 A Berserker eating a garden 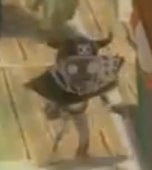 Berserker in a Plants vs. Zombies: Garden Warfare book 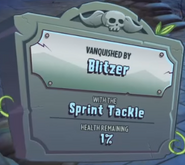 The player was vanquished by a Blitzer 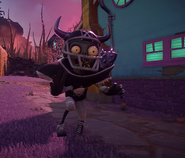 A Blitzer tackling the player