I need my TIME MACHINE!
Blade-Wielding Hero is a conjectural name for this article.
If you know the official name or have a better name or
translation for it, please contact a wiki administrator to change it.

Calls Kongfu zombies, handy with a sword and shield.

A knife to the East, a "flying fairy". It is a famous blade-wielding warrior skill, but he has now been considered as just a "flying zombie".

Blade-Wielding Hero (持刀大侠; pinyin: chídāo dàxiá) is a boss encountered in Kongfu World in the Chinese version of Plants vs. Zombies 2. The player fights him in Kongfu World - Ultimate Challenge.

Blade-Wielding Hero is a much tougher opponent than Gunpowder Devil, as he is capable of summoning more dangerous zombies, and he becomes a very formidable foe when he is low on health.

Blade-Wielding Hero absorbs 75000 damage per shot and does not degrade.

Blade-Wielding Hero will randomly perform one of the following actions:

This is a powerful zombie because he can wipe out an entire lane of plants, can kill plants in one hit with his sword, and can summon really dangerous zombies. The best way of defeating this boss is by having a vast majority of Sunflowers so you will be able to get more plants onto the lawn. 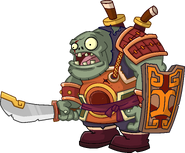 His army before battle

Getting ready for battle

The boss being defeated 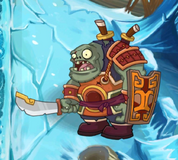 His icon in the boss rush event 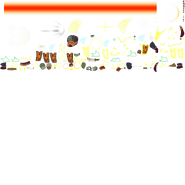 Retrieved from "https://plantsvszombies.fandom.com/wiki/Blade-Wielding_Hero?oldid=2361292"
Community content is available under CC-BY-SA unless otherwise noted.