For a card with a similar name in Plants vs. Zombies Heroes, see Black Hole (PvZH).

Black hole is an environment modifier of Kongfu World, appearing only in Last Stand levels.

When the black hole is about to appear, a message will appear, saying, "The temporal black hole is about to absorb your plants!" The black hole will always appear at the first lane from the left, and will move all plants one column (or more in later levels) to the right. Plants which are placed at the column where the black hole appears beforehand will be sucked in. Both planting and recharging plants are disabled when it appears until it disappears completely. The hole's pulling force can be blocked by Radish. They appear on Days 9, 18, 19, and 23.

While playing these levels, it is highly recommended to bring Radish to counter the black holes. If the player does not have Radish, they may risk losing their plants either by the hole or being eaten by the zombies, since the plants will be pulled closer to the horde. Plant a whole column of them to be safe, and upgrade it if necessary.

Avoid planting Spikeweeds, Spikerocks, and Celery Stalkers as they are also pulled by the portals and the Radishes cannot protect them. Also, it is wise to avoid using Potato Mines, since to use one effectively, they must be planted in front of your Radishes, and thus, at risk of being sucked into the black hole. Do note that unprotected chestnuts from a Chest-nut can also be pulled.

The black hole in a level

The black hole on the map 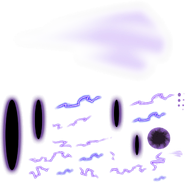 Black hole sprites
Add a photo to this gallery
Retrieved from "https://plantsvszombies.fandom.com/wiki/Black_hole?oldid=2229636"
Community content is available under CC-BY-SA unless otherwise noted.