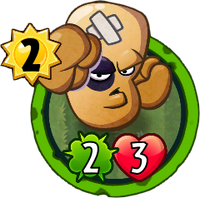 when a Zombie Trick is played.
"You shoulda seen the other guy!"
Black-Eyed Pea is a premium super-rare plant card in Plants vs. Zombies Heroes and a member of the

every time a zombie trick is played, unless it is destroyed by it. This ability stacks with each Black-Eyed Pea on the field and persists until all Black-Eyed Peas are removed from the field. Its closest zombie counterpart is Fraidy Cat.

Its black eye is a visual pun on the words "black-eyed" in its name.

In addition, it may be a reference to "The Black Eyed Peas," an American musical group.

"You shoulda seen the other guy!"

By itself, Black-Eyed Pea is a powerful plant for its cost, with its 2

stats being at the high point for 2-cost cards. However, its real use lies in its ability as a deterrent against heavy trick usage from the opposing hero. As zombie tricks can be highly dangerous to the plants if properly used, Black-Eyed Pea can help in cutting trick usage by giving the plants notable benefits with each trick usage and force the enemy to be more careful. Black-Eyed Pea is technically immune to Nibble, as it will just gain the stats back (unless it only has 1 health, and the fact the zombie hero still gets healed).

This plant benefits a lot from opponents with a trick-based deck, especially against Brainy heroes, so having Black-Eyed Pea against zombie heroes who rely on tricks like Immorticia would really help. Another occasion is Plant Missions, such as Professor Brainstorm's boss battle in Brains in Danger! where Professor Brainstorm's deck is full of Eureka cards, giving Black-Eyed Pea a huge advantage.

However, this does not mean Black-Eyed Pea is a flawless counter against tricks; instant-kill tricks, as well as Barrel of Barrels and Super Stench can remove Black-Eyed Pea regardless of stats (for the latter, the zombie that has received the

Deadly trait does the removing).

Additionally, since Black-Eyed Pea is a pea plant, it can benefit from The Podfather and Torchwood, making it even stronger. Black-Eyed Pea is also a bean plant, so this can also help in a bean deck with Admiral Navy Bean and Bean Counter, although Green Shadow is the only hero capable of doing so.

Avoid using tricks too early unless the zombie fighters can deal with it, especially if you are playing as a Brainy hero. This plant essentially locks down nearly all tricks and is pretty formidable early with its stats. Using powerful zombies will be the key, as well as bouncing this plant. However, Rolling Stone and Weed Spray can take this out immediately, as can Locust Swarm. Alternatively, zombies with stat-lowering abilities such as Pied Piper and Landscaper can weaken it without activating its ability.

A sneaky strategy is if you have any instant-kill tricks like Rocket Science or Cut Down to Size, then you could spam cheap tricks until this plant has a high enough amount of strength points, then finish it off with the aforementioned tricks. However, you should keep an eye on your brain counter, as spending too many brains for other tricks may prevent you from playing the aforementioned tricks.

You do not have to worry about his ability if there is a Zombie with the Deadly trait facing him as it can destroy him regardless of stats.

Note that environments do not count as tricks despite them being playable only in the Zombie Tricks phase, so use them as Black-Eyed Pea will not gain a stat boost.