Start of turn: Conjure a Superpower.
Her beautiful melodies are echoed by the roars of dinosaurs.
Bird of Paradise is a triassic legendary plant card in Plants vs. Zombies Heroes and a member of the

. She has the Amphibious trait, and her ability Conjures a superpower, including signature superpowers, at the start of every turn. This ability stacks with each Bird of Paradise on the field and persists until all Birds of Paradise are removed from the field.

She is based on the bird of paradise flower, specifically the strelitzia (Strelitzia reginae), a perennial plant native to South Africa named for its resemblance to birds-of-paradise; and the bird-of-paradise, a member of the family Paradisaeidae known for its fancy and elaborate plumage for the males.

Her description is a reference to Dino-Roar abilities, and how they activate after a card is drawn or Conjured (the latter in Bird of Paradise's case). It may also be a reference to birds being evolutionarily related to dinosaurs.

One of her beta designs is based on the "bird of paradise" meme.

Her beautiful melodies are echoed by the roars of dinosaurs.

With decent stats of 4

, the Amphibious trait, and the ability to Conjure superpowers of any kind, Bird of Paradise is a legendary able to fit in most, if not all Smarty decks. The Conjured superpowers can range from weaker ones like Whirlwind or More Spore to powerful signature superpowers such as Uncrackable or Sunburn.

Bird of Paradise synergizes well with Dino-Roar plants like Bananasaurus Rex due to her ability, and the more Birds of Paradise there are, the more potent your Dino-Roar cards become.

However, since many superpowers don't have as much game-changing impact this late in the game as it does early-game, it is generally a good idea to have many Birds of Paradise on the field to get many of them at once, as long as they don't take up too much space for your main defenses.

Each Smarty hero has different ways to put this plant to good use.

For your information, here are the superpowers that can be Conjured by Bird of Paradise:

Bird of Paradise is a dangerous card due to her ability to Conjure superpowers and activate Dino-Roar, and given how powerful most of them are, she should be removed as soon as possible.

A single Rocket Science or a few damaging/stat-degrading tricks may be enough at destroying her, but it gets more complicated if you don't have them, or if she is given

Untrickable. Since your opponent will most likely play her on the aquatic lane, your only options are moving cards and Amphibious zombies. Moving Bird of Paradise and destroying her on either the ground or the heights is simple, but if you want to use Amphibious zombies, they will need to either be boosted or given

Deadly, as few zombies will be able to destroy her with raw stats alone (excluding Toxic Waste Imp).

You can also Bounce her so she can't Conjure a superpower. While your opponent can replay it later, they won't have the opportunity to play her safely if you pressure their defenses, so do that too.

Be sure to remove any Captain Cucumbers on the field, or otherwise, you will have to deal with a free superpower.

Bird of Paradise's grayed out card 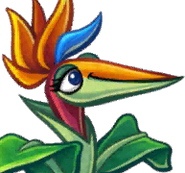 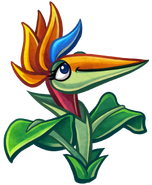 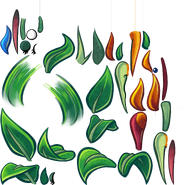 Bird of Paradise being played 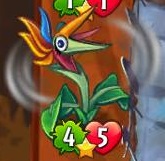 Bird of Paradise activating her ability

Bird of Paradise with the

Bubble Up being played on Bird of Paradise 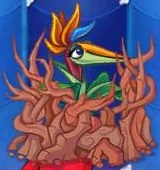 Root Wall being played on Bird of Paradise

Evaporate being played on Bird of Paradise.

Concept art of Bird of Paradise