Plants vs. Zombies Wiki
Register
Don't have an account?
Sign In
Advertisement
in: Under construction, Z-Mech abilities, Imp abilities (all),
and 4 more

Biotic Pull is an ability exclusive to the Z7-Mech in Plants vs. Zombies: Garden Warfare 2. When used, it will fire a blue orb that hits the first plant. Although it will deal no damage it will instead pull them towards the Z7-Mech. Any plant in the orb's radius will be pulled in as well. It can be used with the Zomni-Blade as a combo.

This ability, like Water Cyclone, is best left alone since unless the plant pulled in has less than 80 health, this will just make you a better target to threats like EMPeach and ice characters. However, it's useful for unrooting plants like the Pea/Retro Gatling and then finishing them off with either your Zomni-Blade or your primary weapon, the Z-8 Avenger. Another strategy is using your Z-8 Avenger to hit the plant while they are being pulled towards you, as it will weaken them before they hit the ground, so you can then use your Zomni-Blade to finish them off. 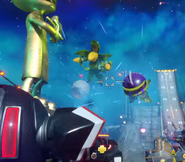 A Chomper and a Kernel Corn affected by Biotic Pull