Plant with no abilities.
Growing Plants in Space? Some of his fellow Zombies think he's crazy, but others appreciate the effort.
Biodome Botanist is a galactic rare zombie card in Plants vs. Zombies Heroes and a member of the

. He does not have any traits, and his ability makes one of the 5 basic plants (Peashooter, Button Mushroom, Weenie Beanie, Bellflower, Small-Nut) at random on a selected lane when he is played.

He is based on a botanist, an expert or student in the study of plants.

His description could be a reference to how some Zombies can benefit from his ability.

Growing Plants in Space? Some of his fellow Zombies think he's crazy, but others appreciate the effort.

This zombie has on curve stats for his cost, and also has an interesting ability. While his ability looks like it hinders you due to it making a fighter for your opponent, you can take advantage of it in a few ways:

It is also noteworthy that he can only make the 5 basic plants (Peashooter, Button Mushroom, Weenie Beanie, Bellflower, Small-Nut) and not those like High-Voltage Currant, Buff-Shroom, or Pear Cub, so you don't have to worry about any traits or abilities either.

In addition, this can benefit well with Immorticia because of his science tribe, meaning he can be boosted by Zombot Drone Engineer and do a bonus attack from Gadget Scientist. Furthermore, Interdimensional Zombie will transform himself into a zombie that costs 3 brains once this is played.

Contary to the popular belief, Biodome Botanist's plant in most of the cases doesn't benefit the plant hero at all:

If you are facing a Kabloom hero, they can play Petal-Morphosis and Molekale, as they can make it more threatening for him. However, both of them are unreliable and are usually seen more in fun decks than in competitve.

This zombie isn't tough to destroy. However, his ability can be rather dangerous and can throw off your strategies very easily. Even if this zombie makes a free plant for you, be careful as it prevents you from playing a strong plant to stop it, unless that plant has Team-Up. What you should do is to take this as an opportunity to play plants that gain an advantage from that like Mushroom Ringleader and Super-Phat Beets to pack a bigger punch, or Muscle Sprout or Astro-Shroom beforehand to make your opponent think twice before playing him. You could directly benefit from the plant made if you have the right deck (for example, Weenie Beanie being made when you are running a bean deck), but this is highly situational and should not be relied on.

If the plant made is unwanted, zombie or plant-moving cards can move it into a zombie's line of fire to help destroy it. Sometimes, it might even be able to finish off a weak or weakened zombie. Just be careful not to move it into a spot where a zombie would benefit, such as Vimpire or Arm Wrestler.

You can also transform the plant using Petal-Morphosis or Molekale to get a stronger fighter from that plant. However, it is incosistent and you shouldn't run both cards unless you are running a "fun" deck. 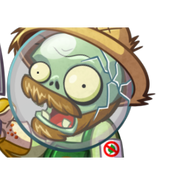 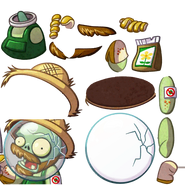 Biodome Botanist with the 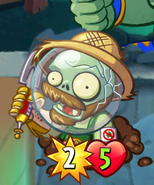 Biodome Botanist on the background of the Galactic Gardens battlefield

Biodome Botanist on an aquatic lane 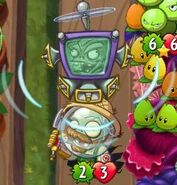