All your cards do double damage.
He's a Gemini and so is she. Which explains so much, right?
Binary Stars are a galactic legendary zombie card in Plants vs. Zombies Heroes and members of the

. They have the Gravestone trait, and their ability doubles the damage all zombies, including them, tricks, and environments do. This ability stacks with each Binary Stars on the field, and persists until all Binary Stars are removed from the field.

They are named after a binary star, a star system consisting of two stars orbiting around their common barycenter. Their concept and character design may have been inspired by the Twins "Wonder Twins", an alien brother-and-sister superhero duo that debuted in the 1970's Hanna Barbera/DC Comics show Super Friends. Their name could also reference the hip hop group with the same name, as both the card and the group consist of two people, and the card is in the dancing tribe as well.

Their name can also allude to Superstar, a term for someone who's very famous or well-known.

He's a Gemini and so is she. Which explains so much, right?

At first glance, Binary Stars seem to have poor stats for a 5-brain card, but their ability allows every zombie and trick that does damage to do twice the amount. In other words, Binary Stars effectively have 6

, except their base strength isn't affected. Since they also have the Gravestone trait, Binary Stars are really difficult to destroy when they are played, as your opponent cannot do anything to destroy them that turn; only with Grave Buster, Blockbuster, or Cool Bean with Winter Squash can they be destroyed. But for the most part, this can benefit every zombie regardless of any tribe as they do double damage according to their strength. Because of this, strength boosts are twice as valuable as they provide a double increase in damage.

Since Binary Stars do not alter the zombies' strength stat directly, you can use them to take advantage of cards that only affect zombies within a specific strength stat range. For example, zombies with 3 strength can do 6 damage without being susceptible to Shamrocket and Doom-Shroom, and Disco-Naut allows all zombies to do a maximum of 4 damage while still keeping their

Bullseye trait. The same also applies to zombies played in Moon Base Z if they have 2 or less strength, as it will also cause the overshoot 3 trait to be also unblockable.

As long as Binary Stars are on the field, Bungee Plumber will do 4 damage, which is quite much for such a cheap trick, while Zombot's Wrath can even do more damage of either 6 or 12. Final Mission can also easily inflict 8 damage, as long as you have a zombie to expend - Destroying Gas Giant will allow you to essentially inflict 18 damage, which can usually finish your opponent off by then if they don't block any attacks. The Chickening can do 4 damage to all plants, wiping out swarms of them, especially mushrooms and Pineclones, which can ruin your opponent's defenses easily.

Since they are part of the dancing tribe, they can put a lot of pressure on the opponent if paired with certain zombies. Aerobics Instructor effectively gives greater strength to every dancing zombie on the field at the start of each turn, making for a very lethal growth in power that can happen in a short time. Flamenco Zombie works really well with Binary Stars as well, as the damage done by his ability is also doubled, allowing for a maximum of 20 damage, which is enough to finish your opponent off regardless of health, excluding special gimmicks and Astro Vera.

If you are playing as Z-Mech or Electric Boogaloo, you can boost Binary Stars' health to allow them to last longer.

Note that multiple Binary Stars can stack exponentially with each other, which can greatly increase other cards' damage. Having at least two of them on board is already devastating if you can play a trick this turn, and three essentially allow you to finish you opponent with terrifying ease.

Remember that since Binary Stars come out of a gravestone, Impfinity can boost them with Headstone Carver so that they can last longer and do more damage. Mixed-Up Gravedigger can also be used to protect it for a turn, but while it hides in the gravestone, avoid playing damaging cards like Flamenco Zombie as it won't do double damage until they are revealed.

Binary Stars are among the most dangerous zombies in the Crazy class, as they allow every zombie on the field and every zombie trick that does damage to do twice the amount that they usually would. You should prioritize destroying this as letting this alive will allow your opponent to do heavy damage to your defenses. Fortunately, their stats are not quite good for a 5

card. Speaking of their stats, Binary Stars only have 3

, so they are vulnerable to Whack-a-Zombie unless their strength is boosted. They also have 3

, so a single use of Berry Blast can take them out easily. However, you will have to survive a turn beforehand before playing either of the tricks, as Binary Stars have the Gravestone trait. In such case, try playing any plant that does 3 damage on the lane with Binary Stars' gravestone instead.

Spyris can be useful, as it will warn the player whether or not Binary Stars are about to be revealed. However, keep an eye out of Conga Zombie that can destroy Spyris. Grave Buster can be played to take these zombies out for 2

, and Cool Bean can prevent Binary Stars, as well as any other unrevealed gravestone zombies, from attacking when they are revealed, but other zombies and zombie tricks will still attack for double damage, so be forewarned. If you are using Winter Squash, teaming this with Cool Bean can destroy them completely as well. 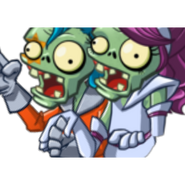 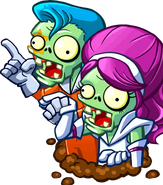 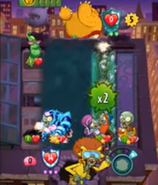 Binary Stars tinted gray due to a glitch 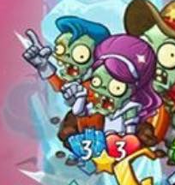 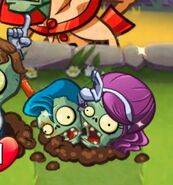 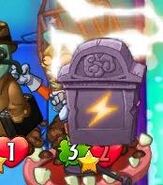 In-Crypted being used on Binary Stars 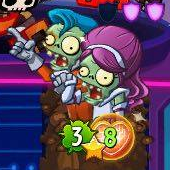 Binary Stars' card missing its brain cost due to a glitch

Lurch for Lunch being used on Binary Stars

Bullseye trait due to Disco-Naut's ability