Special
That's right, folks! Better Butter! Instead of lots of tiny buttery explosions, how about one massively huge one?
Bigger Better Butter is one of Kernel Corn's abilities, and is the alternate ability for the Butter Barrage. When used, Kernel Corn will throw out a Hot Potato as usual. Unlike the Butter Barrage ability that creates a hot potato that summons 12 blocks of butter in an X shape, it summons a huge block of butter that deals up to 200 damage in a large radius. If the butter lands on a zombie, that zombie will take 20 damage. It is only obtainable if you buy the Deluxe Edition or the Deluxe Upgrade of Plants vs. Zombies: Garden Warfare 2, along with the Super Multi Ball. It takes 35 seconds to recharge.

That's right, folks! Better Butter! Instead of lots of tiny buttery explosions, how about one massively huge one?

Bigger Better Butter is extremely useful in many parts of the game. Its surprise factor and ability to instantly vanquish any zombie in its radius is extremely useful. The best times to use this are to defend Gnome Bombs or Gardens, as well as getting into Graveyards in Turf Takeover. This can also net a lot of vanquishes around groups of zombies, so try and aim there. Bigger Better Butter also has the same sounds as the regular Butter Barrage, so the only way a zombie will know which ones which is by waiting to see if a big butter falls or multiple small butters fall. The butter that lands detonates extremely fast, making it difficult for most zombies to escape its clutches.

The only weakness to this ability is its range. It can vanquish most zombies, but only at close range, while Butter Barrage has a much forgiving range. Even still, this ability can still extremely weaken zombies.

Against Bigger Better Butter, there is very little that can be done. Moving away from the Hot Potato that is thrown will result in the plants being able to get into the graveyard, defuse a Gnome Bomb, etc. However, not moving will result in a vanquish. Carefully watch any Hot Potatoes that fly by. If no butter falls immediately, run away from it, as it's a Bigger Better Butter. Scientists, All-Stars, Engineers, and Super Brainzes have good abilities to try and escape, but the other 3 classes will have to get crafty on how to get out of there. 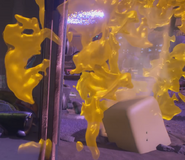 The big block of butter that appears