For the Chinese version of the level, see Big Wave Beach - Ultimate Challenge.

A money bag
Big Wave Beach - Day 32 is the thirty-second level of Big Wave Beach in Plants vs. Zombies 2. Dr. Zomboss makes his appearance in this level with his Zombot Sharktronic Sub. Being a boss battle, the player is forced to beat his creation in order to win the level. The tideline is located between the second and third column. When this level is finished for the first time, the player gets the Big Wave Beach Trophy.

The Zombot Sharktronic Sub summons these zombies underneath the ocean during these respective phases:

The Zombot Sharktronic Sub's replacement for a charge attack is an attack that will vacuum up the player's plants, and grind them up to dust with a large, destructive fan. To counter this, simply place a Tangle Kelp in the space directly in front of the Zombot. The Tangle Kelp will entangle the machine's fan, temporarily immobilizing it. This boss's replacement for a targeting attack is the ability to summon three sharks to demolish the player's aquatic defenses. There is no counter for this, so placing Banana Launchers on Lily Pads is not the best strategy. The zombie sharks will target randomly on any tile on the lane.

The Zombot Sharktronic Sub platform after defeating Dr. Zomboss (Before the 5.5.1 update)

The beginning of the battle

Gameplay of the level in a promotional picture 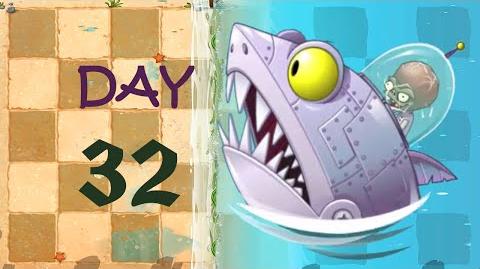 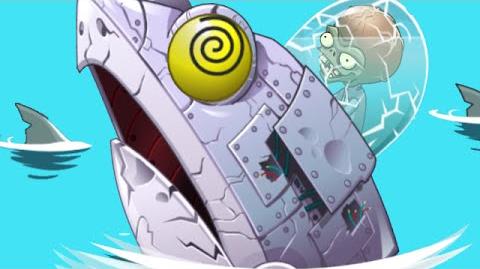