Same as before
Big Wave Beach - Day 21 is the twenty-first level of Big Wave Beach in Plants vs. Zombies 2. It is a Special Delivery level. Homing Thistle is showcased here. The tideline is located between the first and second column. After completing this level, the player receives a money bag.

(Crazy Dave and Penny appear)
Crazy Dave: Whew! Fighting Zombies that arrive in waves AND tides isn't easy.
Crazy Dave: You know what we need, Penny? An ally with a hot of 'tude!
Crazy Dave: And by 'tude, I mean attitude. In case you need translation.
Penny: Then I suggest we call upon Homing Thistle.
Penny: I believe he has this 'tude you speak of.
Crazy Dave: His eyes! intense! He can shoot the zombies a real mean look.
Penny: More importantly, he can shoot deadly darts that home in on their target.
Crazy Dave: Two painful blows for the price of one! Radical!
(Crazy Dave and Penny leave)

Once you get the first Homing Thistle, place it in the third row of the backmost column immediately. This will allow its attack to access zombies both high and low faster, and help you prepare yourself for the first Surfer Zombie that will appear. All Homing Thistles should be placed at the backmost column for an ensured protection also while your Lily Pads should go to the third and fourth columns or on columns where the water is. Lily Pads will also serve as platforms for Iceberg Lettuces. If you managed to get at least three of Homing Thistles at the start of the level it will be easier to take care of the first Surfer Zombie.

After defeating the first three Surfer Zombies, a script triggers for the shoreline to go in the fifth column and will be followed by the arrival of two Surfer Zombies (their appearance will be regardless of column) also. Keep on placing more Homing Thistles to hasten killing Surfer Zombies. If you managed to get stuck in a tight situation, you may place an Iceberg Lettuce to stall one or feed it with Plant Food if there are many Surfer Zombies. After this set is gone, the first wave will be triggered.

You can either choose now to give an Iceberg Lettuce or Homing Thistle some Plant Food, but it would be strongly advised to feed it to an Iceberg Lettuce, in order to put the Snorkel Zombies to a complete halt as well. This provides you with ample time to think of your next strategy and also save your Lily Pads. Keep at least one Plant Food for a last resort option. Save the rest of the Plant Food halfway through the first wave so you can freeze zombie hordes with Iceberg Lettuces for the upcoming waves.

At the second wave, another script will be triggered, and shores will hit the third column, which allows all Surfer Zombies to compensate. At this time, you may use stored Plant Foods to destroy any placed surfboards since the level has started or frozen the horde once more. Place excess Lily Pads on the second and third columns so Surfer Zombies will have to impale the plants in second column so there will be nothing left to worry about for the final wave.

For the final wave, the final script triggers the shores to touch the second column and the last set of zombies will arrive. Use the same strategies with Plant Food. The threat level is minimal on the final wave. However this level is hard being restricted to a few plants, the conveyor-belt's randomness, the Homing Thistle's AI, using a new plant against Surfer Zombies that can instant kill on shore, and the Snorkel Zombie's low protection, do not be afraid to launch a mower out or use a power-up if you're close to finishing the level (or run out of Plant food).

Alternatively, a boosted Iceberg Lettuce makes this level very easy as all zombies remain frozen, allowing the Homing Thistles to kill zombies easily without much hindrance.

Arrival of the first Surfer Zombie

The shores hit the fifth column 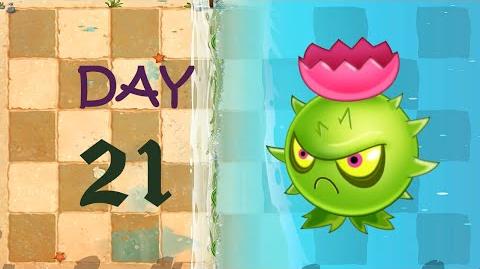 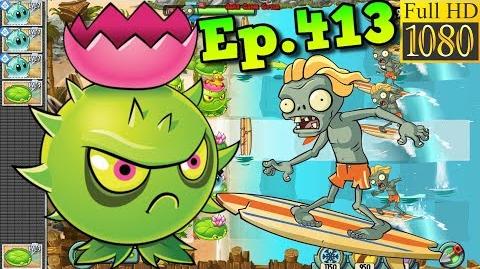 Retrieved from "https://plantsvszombies.fandom.com/wiki/Big_Wave_Beach_-_Day_21?oldid=2358427"
Community content is available under CC-BY-SA unless otherwise noted.