Same as before
Big Wave Beach - Day 2 is the second level of Big Wave Beach in Plants vs. Zombies 2. Bikini Zombie and her variants, the Bikini Conehead and the Bikini Buckethead, are introduced here. In this level, tides will change for the first time. Additionally, the tideline is located between the third and fourth column. After completing this level, the player receives a money bag.

This strategy involves the usage of only peashooting plants as offensive and defensive plants, Magnet-shrooms as utility plants and Twin Sunflowers for sun production purposes. If you have the extra seed slot upgrade, usage of a cheap single use plant is suggested, especially Potato Mine or Squash. When the level begins, you should focus on planting as many Twin Sunflowers as possible on the second lane, until the first zombie closes in. Snow Peas should be planted rapidly to the first column before the first wave comes in order to slow down all incoming zombies. Note that a Snow Pea can handle normal zombies and Conehead Zombies all by itself. As you acquire money to do so, you should plant Twin Sunflowers on the first, third and fifth tiles of the third column. The first Buckethead Zombie will arrive early, so when the first flag is reached, you should have at least one Magnet-shroom on the sixth column, a Pea-nut in front of it to defend it and preferably a Repeater on either the fourth or fifth column to ease the pressure in front of the Pea-nut. At this stage, you can either strengthen individual lanes by planting Repeaters or planting Threepeaters on the second and fourth tiles of the third column to increase the firepower in every lane. You should be quick to build up as much Magnet-shrooms as possible to the sixth column as the level is quick to send high concentrations of Buckethead Zombies. You should back-up the Magnet-shrooms with Pea-nuts and Repeaters. If the zombies manage to breach the defenses in one lane, the single-use plant can be used to get rid of them. If too many Buckethead Zombies come before the defenses are ready, you can use the one Plant Food given earlier in the level on a Magnet-shrooms to remove all buckets. When there are enough Magnet-shrooms and Repeaters, the plants become sustainably competent by themselves to stop upcoming zombies. At this point you should work on completing the Repeater columns and replacing/first aiding Pea-nuts. When the set-up is complete, the level can be beaten easily. 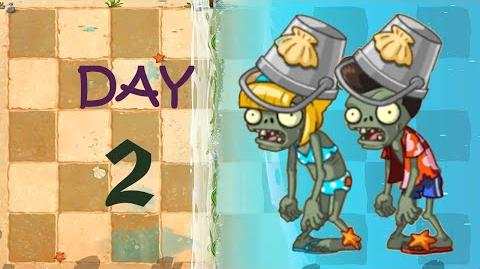 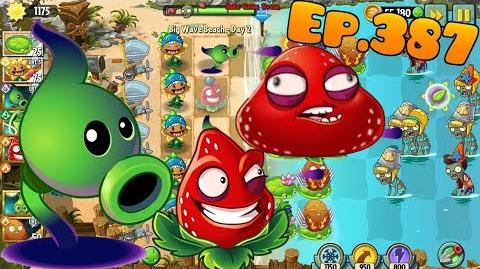 Retrieved from "https://plantsvszombies.fandom.com/wiki/Big_Wave_Beach_-_Day_2?oldid=2276305"
Community content is available under CC-BY-SA unless otherwise noted.