Survive and protect the endangered plants
Big Wave Beach - Day 15 is the fifteenth level of Big Wave Beach in Plants vs. Zombies 2. It is a Save Our Seeds level. To complete this level, the player must protect five Potato Mines, all located in the third column. The tideline is located between the third and fourth column. When this level is finished for the first time, the player receives a note.

(After beating the level and obtaining the note)
Crazy Dave: Look! It must be time to play Beach Zombie Bungo!
Penny: Bingo, User Dave. It's BINGO.
Crazy Dave: You already won, Penny? Wow. You're good at this!

First, set up a column of Sun-shrooms. Plant a Primal Peashooter immediately after that. Use the Ghost Pepper if you do not have enough sun. When you are done, plant two columns of Chard Guard in front of the Potato Mines (remember the Lily Pads). Use Plant Food on Primal Peashooter or Ghost Pepper only if the zombies are very close to the Potato Mines. Primal Wall-nut should be used as well. Remember to replace the Chard Guards when all of their leaves are gone.

Attention: This strategy should not be done on high Dynamic Difficulty.

First, set up a column of Sun-shrooms. Take out the starting zombies using Tangle Kelps. After getting the first Plant Food, place an Infi-nut in the middle row in front of the Potato Mines. Use Plant Food on the Infi-nut, plant Bonk Choys in the rows behind the force field, plant Magnifying Grasses behind the Potato Mines, and the level should be a breeze from there. Try to save Plant Food for healing the force field, as it will get hurt badly. Only use Cherry Bombs when groups of zombies/Low Tide ambushes happen. Try to use Tangle Kelps to take out any tough zombies. Use Magnifying Grass as your main attacking plant, as Bonk Choys are only there for back-up.

First time reward in this level 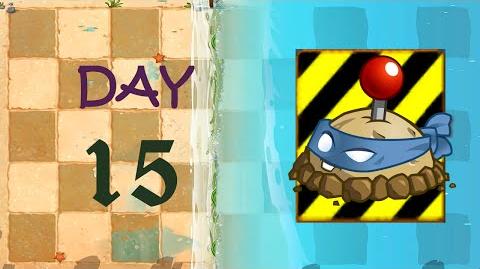 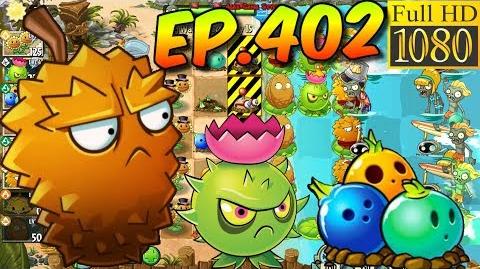 Retrieved from "https://plantsvszombies.fandom.com/wiki/Big_Wave_Beach_-_Day_15?oldid=2369385"
Community content is available under CC-BY-SA unless otherwise noted.