Never have more than 16 plants
Big Wave Beach - Day 13 is the thirteenth level of Big Wave Beach in Plants vs. Zombies 2. This level has two objectives. The tideline in this level is located before the first column, which means that the tide will rise, and water will cover the entire lawn at one point during the level. After completing this level, the player receives a money bag.

This level is hard, due to the objectives. Never have more than 16 plants is the hardest, as the distractions of low tides, Surfer Zombies, and sun production requires planned strategies to complete, unlike Last Stand. Plus, a Lily Pad counts as a plant, making your defenses be having less than two full columns.

An update lowering the flag count to three makes it easier to deal with the zombies, it simultaneously makes it harder to reach the sun target.

Twin Sunflowers must always be planted on the Lily Pads provided. Use Tangle Kelp, Chili Bean, or Ghost Pepper to kill few of the early zombies. Potato Mines can work but must be carefully planned to use it because it requires the Lily Pad if the player doesn't want to lose it when the tide comes.

If the player has obtained Shovel Perk, use it on Ghost Pepper to get a refund after it kills a single zombie. Use Sun Bean in conjunction with other of the single use plants to hasten the sun collection objective but use it on Conehead Zombies or other stronger zombies.

If the player uses Tangle Kelp as a conjunction to Sun Bean, shovel up the Lily Pad after the Sun Bean gets consumed to get a refund. Once the player has enough sun, plant Winter Melons at the back column on the second and fourth rows first to delay zombies that come in hordes.

Start shoveling the Twin Sunflowers and Lily Pads below them, gradually. The player still needs some sun producers to achieve the objective. Start adding 3 more Winter Melons, the player must be sure to have achieved the sun collection objective.

The player must be sure to have remove all the preexisting Lily Pads already so that there is room for extra last minute plants. By the time the final wave comes, the player can have the option to plant two Threepeaters on the second and fourth column and use Plant Food for both of these, and also use Plant Food on Winter Melon also. The player can also use the Cherry Bomb instead if there are too many zombies to handle in the final wave.

The plants selected for this strategy works on the old version of this level. For the recent version, pick Sun Bean and Chili Bean instead of Potato Mine as Potato Mines can no longer be planted on Lily Pads. General strategy works the same but Lily Pads may no longer provide a refund. Give plant food to Sun Bean if you need to complete the Sun bank goal really quick.

At the first wave, start planting and digging up Sunflowers until you get 500 sun. Plant a Winter Melon where the first zombie is, and continue doing the Sunflower/Winter Melon combo until you fill the whole row. Now fill the second row with first, third and fifth column. This should cover the other waves. By the final wave, you should have three Plant Food. Use them on three Winter Melons when all of the zombies appear.

Quite similar to strategy 1, this strategy uses Tangle Kelp in combination with Magnifying Grass until you have enough sun to start planting Winter Melons in the even rows, and then all the rows. Use the back row for five Twin Sunflowers and place Tangle Kelp early in the third row to leave time for a second one to respawn. This leaves room in the second row for a Lily Pad and Magnifying Grass combo if you get in trouble. Make sure you have one or two Shovel Bonuses to earn sun back if you need to remove them. Try to target closest zombies and ones with Plant Food next.

Remember to use Tangle Kelp mostly for the Snorkel Zombies, although you can wait for them to rise to hit them with Magnifying Grass's bolts. By waiting for the zombies to get close, it gives you more time to build up sun and deal with less zombies. You can always fast forward the game too. At least one Tangle Kelp or Winter Melon must be ready to use with Plant Food in event you get overwhelmed, and also for the final wave. If you see five Surfer Zombies approaching, wait a few seconds then Plant Food on Winter Melon. You can use it on the Twin Sunflower if you feel safe and have enough sun for a Winter Melon.

Same as above, but easier: just place a Infi-nut in an even row of the fourth column and use your first Plant Food on it. Plant a Winter Melon in the first column in the same row to defend it against Surfer Zombies. This will stop everything, you can even have six Twin Sunflowers out to quickly meet the requirement and just relax to slowly pick off zombies with a single Tangle Kelp until you have enough for five Winter Melons. Guard the row you put the Infi-nut on with a Magnifying Grass or Tangle Kelp, as a Surfer Zombie can still destroy it. All the other Surfer boards will be planted over the wall, but your lobbing plants will keep shooting over them when there's zombies. The final wave will be your last test, but you should have three or four Plant Foods by then to have fun with.

Most of the extra plants will work well inside the wall and some outside. For an added challenge, replace Winter Melon with a different lobbed plant like A.K.E.E.

As of the time writing this, there is a bug which Tangle Kelp cannot kill Snorkel Zombies. Hence, start by planting column 1 with Twin Sunflowers, and use Iceberg Lettuces to stall the first few Snorkels.
Fill C2 with Wall-nuts, but ONLY do so for rows which the first few zombies are at. DO NOT place a Wall-nut on C2R3.
Then, dig up the Twin Suns on C1R2 & 4, and replace them with Snapdragons. This will deal with the first few zombies. Now the player should have enough space to plant a Lily Pad + one more plant. Ensure it stays this way throughout most of the level.
During the first flag, a Buckethead will appear. The player shall do 3 things:

Tangle-kelp/ice lettuce the next few coneheads after the first flag. Wall-nut the rest.
A Surfer Zombie will come right after 2 waves of coneheads, save a Tangle-kelp for it. At the same time, dig up the Twin Sunflower at C1R3 and replace it with a Snapdragon.
This way, a Cherry Bomb can be planted for the next Surfer Zombie after that ^ one. Ensure that the explosion takes out as many Bucketheads as possible too. Continue to prioritize Tangle kelps on Surfers throughout the game.
By the second flag, the large horde of zombies will most likely overwhelm the defences, so Cherry Bomb the survivors. The problem is that during the second flag, one column of Surfers will come. Hence, it is time to use 2 plant food on each of the Snapdragons at C1R2 and C1R4 to kill the surfers.
Hopefully, after the 2nd flag, the player will produce 2000 sun already, so dig up more Twin Sunflowers and replace them with Snapdragons. Don't hesitate to use a plant food on Snapdragon if the zombies overwhelm your defences. Finally, the player is advised to have 3 Wall-nuts to stall the Bucketheads, causing the player to have no more planting space. But that will soon change...
During the final wave, dig up one Snapdragon and its Lily Pad, then plant another Snapdragon without the Lily Pad, this way the player has 1 space for a Cherry Bomb. If the Tangle Kelp has recharged, immediately use it to kill a Buckethead in C9 before it reaches the shore. Stall the low-tide Bucketheads with Wall-nuts. Finally, Use plant food on Snapdragons/to recharge the Cherry Bombs when the Bucketheads group together.

Done by GalacticFNAFRunner
Add a photo to this gallery 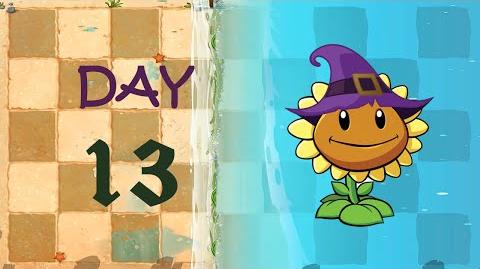 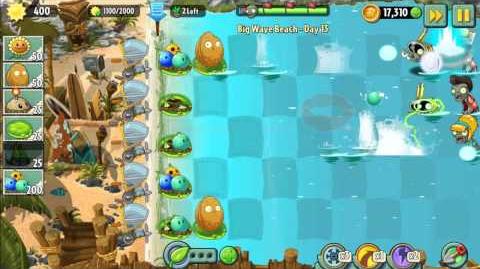 Retrieved from "https://plantsvszombies.fandom.com/wiki/Big_Wave_Beach_-_Day_13?oldid=2354665"
Community content is available under CC-BY-SA unless otherwise noted.