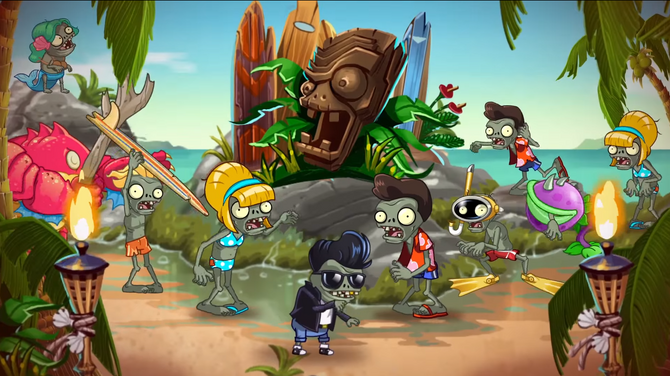 Big Wave Beach is the 10th world (6th world released chronologically) in Plants vs. Zombies 2 released in the 2.9.1 update of the game, bringing new zombies and aquatic plants, with the return of Lily Pad, Tangle Kelp and Snorkel Zombie from the first game.

Big Wave Beach takes place in the 1960s, when surfing gained popularity. Due to that, lots of beach gear like woodie (a car body style), necklaces with tiki faces, and beach clothes, like bikinis, have been invented.

The main stage element of this world is the water. In each level, there is an arrow and a line of seaweed called the "tide line" that divides the land and water. This changes in every level. "Low Tide!" is the surprise attack for this world, which summons Imp Mermaid Zombies in random lanes, similar to Bot Swarms in Far Future. However, dangerous zombies can also be summoned, such as Octo Zombies, or even Deep Sea Gargantuars.

Take a trip back to the '60s and hang the ten on the ocean waves! Tides are changing and those gnarly zombies make it not-so-safe to go back in the water!

If the player already obtained the World Keys they can gain access to Big Wave Beach.

After beating Day 15, the player obtains a bingo card with brains and a zombie head marked as "BINGO." After defeating the horde of Deep Sea Gargantuars on Day 16, the player gets a Mystery Gift Box.

On Day 32, Dr. Zomboss states that Chomper and Bikini Zombie have become cozy lately, which makes him think that a beachside plant-zombie romance is going on. He also notes that Chomper has the appetite of a zombie, making his loyalty questionable. After defeating Zombot Sharktronic Sub, Penny says that Dr. Zomboss is just trying to "sow the seeds of discontent," while Crazy Dave also adds that they are the only ones who's going to "sow the seeds."

Hence its five Jalapeno difficulty, this can be an extremely hard world. The main reason is the water, making it harder to place plants. The zombies can be especially hard; Surfer Zombie can easily destroy a plant on land and create a surfboard which can make you lose plantable space. Fisherman Zombie can pull plants to water, instantly killing them and Octo Zombie, who is infamous for easily disabling plants and blocking shots with his octopi. Some of the levels have difficult objectives such as Day 30 which forces the player to protect Guacodiles. Due to all of these reasons, many consider it the hardest world of the game. It is significantly harder than the last world, Jurassic Marsh, and actually a lot harder than the next, Modern Day.

+ It is boosted automatically.
" Conveyor-belt level

Bulb Bowling is a Brain Buster exclusive to Big Wave Beach. It is similar to Wall-nut Bowling from Plants vs. Zombies. The Bowling Bulb itself is broken down into four different parts respectively with each bulb has different damage. The player must attack the zombies by using the bulbs by placing it behind the "No Bulbs" sign. The bulbs will ricochet once it hits a certain zombie.

Special Delivery is an exclusive Brain Buster without any criterion to fulfill in order to achieve victory. Much like the Gargantuar battles, the plants provided to the player are given via conveyor-belt and must survive a set of waves.

Locked and Loaded makes the player restricted to the plants that they will use. They are only required to use the plants given to them in order to win the battle. Even though the plant is locked yet, they can get a tendency to use that plant (unless it is unlocked already). This will serve as a demo for that plant if ever that manages to happen. The player must win only using the given plants to them. Locked and Loaded serves as a reference for a certain weapon in real life, where once it is armed, it should not be disarmed any more.

The player must survive a flag in order to accomplish the level. In this Brain Buster, the player is given a limited amount of sun to make use of and two or four Plant Foods at their disposal because there will be no glowing zombies and falling suns to replenish sun for plant production to aid the player from a victory. Sunflower, Sun-shroom, Sun Bean and Twin Sunflower are not allowed in this Brain Buster, but other than these four, there are other plants as well that are not allowed. Followed by that, the player will deal then with an extreme number of zombies charging at their lawn. If the player is very creative enough to formulate his or her own plan, they can win without the aid of Plant Food.

In this Brain Buster, the player is forced to survive the wave of zombies and protect the endangered Potato Mines, Banana Launchers and Guacodiles. Otherwise, they will fail the level.

Tiki Torch-er is the Endless Zone of Big Wave Beach which is unlocked after beating Day 20. Just like the other Endless Zones, the player starts with Sunflower, Peashooter, Wall-nut and Lily Pad as an exclusive plant. The tide lane changes every level and all the zombies encountered at Big Wave Beach except Zombot Sharktronic Sub appear in this Endless Zone. Low Tide can occur at any time and instantly wipe out plants that are not protected by a Lily Pad, especially in later levels. The higher the level, the harder the onslaught of enemies in number and difficulty. However, it is slightly easier than Modern Day's Endless Zone "Highway to the Danger Room" because Highway to the Danger Room has unpredictable portals which may spawn dangerous zombies from any world.

Zombot Sharktronic Sub is the boss of Big Wave Beach which appears in Day 32. It has three attacks: summoning zombies, sharks, and using turbines to attract all plants and zombies in its two lanes into its mouth. Tangle Kelp, when attracted, will stun this Zombot. Beach Flag Zombie and Fisherman Zombie are the only Big Wave Beach zombies do not appear in this battle.