Big Stump is a plant boss in Plants vs. Zombies: Garden Warfare 2. Its appearance is similar to the Giga Torchwood, except its head is not on fire and its right arm is a club-like weapon, which it uses as a melee weapon. It could be considered the Gargantuar of the Plant side.

When 3 slots land on the Big Stump icon, a super Big Stump wave will occur. Big Stump emerges from the ground in a cutscene, growling and slamming his club hand like a fist on his other hand. During a Big Stump wave, Rock Peas and Petrified Cactus replace regular hero plants over to the spawning of multiple armored Weeds.

Stay away from this Boss as much as possible if you have low health. At close range, it is a great threat. It can disrupt attacks like Super Brainz' Turbo Twister or the Engineer on its Big Bolt Blaster. Its Club Slam, Bark Throw, and Charge Slam all do high damage. Long ranged zombies, such as Captain Deadbeard, Foot Soldier, Golf Star, or Painter, are extremely useful, as they can attack without fear of the Club Slam. However, they must be wary of his Bark Throw attack, which deals heavy damage at most ranges.

If you have a team with you, try to have a heavy character like Super Brainz or All-Star distract the boss while everyone else stays at range to deal damage. If possible, try to have a Scientist healing the heavy simultaneously. This is easiest with the Heal Beam of Science and Mega Heal Bomb. 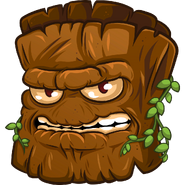 Big Stump in the backyard