Freeze a Zombie.
Draw a card.
Discerning Plants agree: Zombies are best served on ice.
Big Chill is a super-rare plant superpower trick card in Plants vs. Zombies Heroes and a member of the

Freeze effect and draws a card. Its closest zombie counterpart is Frosty Mustache.

Other than giving you a card advantage and activating Dino-Roar abilities, Big Chill is essentially the same as Iceberg Lettuce as both of them cost the same and can only 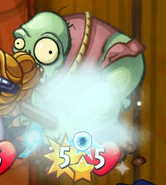