N/A
Big Bolt Blaster is the second ability for the Engineer in Plants vs. Zombies: Garden Warfare 2. When called, the Engineer will summon a large ride-able sentry turret with 100 ammo which can turn at all angles and shoot plants around him with big bolts, similar to the Peashooter's Pea Gatling and the Sunflower's Sunbeam abilities. While this ability is in use, it takes 33.3% less damage from enemies and has a smaller hitbox (turret itself doesn't take any damage) and deals more damage. However, its range is shorter than the two former abilities and the recoil is higher. It's alternate ability is the Bedazzled Bolt Blaster.

If you got something that needs protecting, the Big Bolt Blaster is the right tool for the job! Hop on, dig in, and mow down any plant that stands in your way.

Just like how the ZPG is the counter to the Pea Gatling, Shuck Shot is the easiest way to take care of this, since unlike the Pea Gatling or Sunbeam, shooting the turret itself doesn't damage the Engineer himself, so this will likely win against a Pea Gatling. Attacking it from a distance could also be a good idea, as the Big Bolt Blaster doesn’t have as much range as the Pea Gatling. 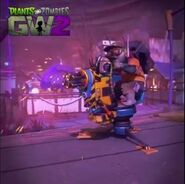