Better Off Dead is an achievement for PC, iOS, and Android versions of Plants vs. Zombies. To unlock this achievement, the player must reach a streak of 10 in I, Zombie Endless.

Its name is a reference to the movie Better Off Dead.

When attempting to earn this achievement, make sure to take out the Umbrella Leaves and Magnet-shrooms as many zombies rely on metal objects. In rows without Kernel-pults or Fume-shrooms, Ladder Zombies are suggested, as their ladder shield effectively protects them from the chilling effect from Snow Peas. Removing Snow Peas should be your next priority after the Umbrella Leaves and Magnet-shrooms. If you would like to use Digger Zombies, make sure all the Split Peas and Starfruits are eliminated, especially to protect your Imps. Torchwoods and Threepeaters should also be wiped out as soon as possible. Spikeweed is a lesser threat, but treat it with caution when using Imps, as they will only survive one more hit after crossing a Spikeweed. Use Dancing Zombies against rows with forward fire, as the Backup Dancers will be the ones killed. Do not use Dancing Zombies in lanes with Spikeweeds or Imps in lanes with two or more Spikeweeds. Note that your total amount of sun will be carried on to the next level, thus save up as much sun as possible. On certain versions, you can perform a glitch where placing several Bungee Zombies rapidly on one Sunflower will grant you a large amount of sun. However, this can be hard, but you can easily perform it by clicking the Bungee, quickly pausing, moving your mouse to a Sunflower, unpausing and clicking, quickly pausing again, moving your cursor to the Bungee packet, then repeating the process. 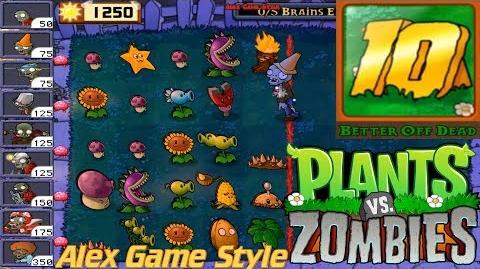