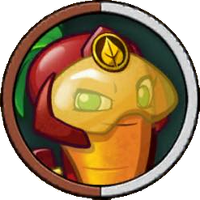 Beta-Carrotina is a plant hero in Plants vs. Zombies Heroes and a leader of the

Smarty classes, alongside Citron. Her signature superpower is Genetic Amplification, which Conjures a 2

and the Amphibious and Team-Up traits. She was added on July 11th, 2017 along with Huge-Gigantacus as part of Season 3 of the Galactic Gardens update.

It is currently unknown what plant she is a hero version of. She may be based of Intensive Carrot.

She is based on the Daucus carota, commonly known as the carrot.

Her name is a portmanteau of "beta-carotene," a provitamin A carotenoid, which the carrot is known for containing, "carrot," the real-life plant she is based on, and "Tina," a common female name, derived from the name "Christina."

Her "Wombo Combos" deck is a reference to the Super Smash Bros. meme.

Her "Starch Wars" deck is a reference to the Star Wars franchise.

Her "Amphi-bean Assault" deck is a pun of "Amphibian Assault" Which are ships that support marines during landing operations against defended positions ashore.

As leader of the Plant-etary Guard, she's ready to root out Zombies wherever they crop up.

Leading the Guardian and the Smarty classes, Beta-Carrotina is similar to Citron. As such, most of her play style will be very similar to him. However, what sets her apart from him are her superpowers. Genetic Amplification will allow her to obtain any 2

plant within the game and allow her to play it anywhere she wants to, including the aquatic lane. Her other superpowers are all about outsmarting her opponent; Ensign Uproot allows her to manipulate the field on either her side or the opponent's with a 2

plant on the field, Lieutenant Carrotron allows her to obtain any root plant in the game as well as leaving a 2

plant with Team-Up, while Lightspeed Seed will Conjure tricks, even ones she cannot normally play such as Squash and Berry Blast. Overall, most of her superpowers involve Conjuring, in which a Conjuring deck is useful when using this hero. But unlike Citron, she lacks the ability to shield her plants with exception of Force Field, making her less defensive-minded and more reliant on tactics compared to him.

The best plant to synergize with her superpowers would be Rescue Radish, as you can activate Ensign Uproot and Lieutenant Carrotron's ability again. Whether you are trying to pull a card advantage or reposition and re-strategize the field to suit your winning conditions, just make sure you have enough sun to do so.

Her biggest weakness would be rush decks, as most of her cards require setup.

Mostly similar to Citron, Beta-Carrotina will prove to be a hard opponent to hit since she can swarm the field with plants that are hard to hit. Fortunately, she only has Force Field to shield her plants, meaning in terms of stalling powerful attacks, she is more likely to be defeated first than Citron. Also, her superpowers are mostly based on Conjuring, so Quickdraw Con Man will be more useful against her than Citron.